Palmiro Togliatti: The International Significance of the October Revolution Nearly a third of a century has passed since Soviet Power was established. Since November 1917, 31 years have gone by in the course of which mankind and the peoples of capitalist Europe in particular, have passed through a period of acute economic and political crises, through bitter battles between the forces of democracy and peace and the forces of reaction and war.

This period was, without a doubt, one of the stormiest periods in the history of mankind; but at the same time it was one of those periods when people and nations acquired valuable experience of decisive importance for their orientation and for their future. We, who lived through this historical period in daily struggle: fully appreciate the value of this experience, and, most important, we realise that the existence of Soviet Power was a decisive factor from the very beginning of the great October Socialist Revolution, decisive for all people; for all nations, for all mankind. The course of world history was changed on that day when the Russian workers and peasants, under the leadership of the party of Lenin and Stalin, brought about the downfall of tsarism, smashed the miserable attempts of the Social Democrats to save the regime of capitalist exploitation by betraying the working people and, in the name Socialism, seized power and began to build a Socialist society.

Capitalism and imperialism lost their monopoly of domination and found themselves face to face with a new power. And this new power grew and gained strength from the daily life of 200 million free builders of a new society, and from the consciousness of millions upon millions of working people throughout the world. From that day onward there was not a vital question affecting men and women who live by labour, not a militant manifestation of the workers, and the peoples, not a decisive historical crisis in which the new Socialist State—the Union of Soviet Socialist Republics—was not in the vanguard of the struggle for political and social progress in which, it did not play the role of leader of all forces who had honestly joined the struggle for freedom, peace and the emancipation of labour.

We all remember those early years of the October Revolution. The fact that the working class was able to take over and maintain power in a great country, thrilled millions and millions of people. This was a decisive moment in the lives of all working people and of all honest friends of progress, determining their political, ideological and moral attitudes. It had been proved at last that a new class could come to power and replace the old exploiting class. It had been proved at last that the chain of imperialism could be broken. It had been proved at last that mankind had a new path which can lead to victory on condition that the working class is conscious of its tasks, on condition that the working class is headed by a Party capable of leading it to the realisation of these tasks. For our class enemies, for capitalism, for imperialism, the victory of October sounded as their death knell.

That is why during those early years after October 1917, there surged forward a mighty movement of indignation against the old bourgeois order, against imperialism; a movement which gripped all the capitalist and colonial countries and which although it did not lead at the time to the final victory of the working class was, nevertheless, the starting point for a new, movement which steadily grew, gained strength; cleansed its ranks and developed into a broad front of struggle for peace and freedom.

During those years, the best elements of the working people of all countries really acquired something new and decisive. This was none other than the experience of Bolshevism which we began to grasp and drew from it confidence. in our inevitable victory; this experience showed us the path leading to victory. That is why the October Revolution is not only the birthday of Soviet Power but also the birthday of the contemporary international Communist movement, the conscious movement of people to smash the chains of imperialism.

Our enemies also realised this and started a bitter struggle on all sectors; armed intervention against the young Soviet Republic, brutal reprisals against the working-class movement in the capitalist countries and against the uprisings of the colonial peoples, treachery of Social Democracy which sought to crush the working class and then to disintegrate and corrupt it.

The peoples of Russia, lead by the two titans of revolutionary thought and struggle—Lenin and Stalin—were victorious. The Union of Soviet Socialist Republics defeated all internal and foreign enemies, so that when the countries where the bourgeoisie held sway again found themselves in the grip of economic crisis—which was inevitable—and the exploiting classes, to preserve their power, established regime of open violence and gave birth to fascism, the Soviet Union towered like a beacon lighting the way for all free-thinking and progressive people. 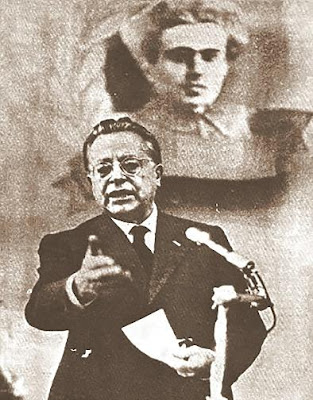 The U.S.S.R. affords decisive historical proof of the ability of the working people to build, under the leadership of the working class and the Bolshevik Party; a new economy, large- scale industry, socialist agriculture and a democratic socialist state in which the working people are free and happy, and in which there is no place for traitors, for enemies of the people, for fascism and its agents. In the years preceding World War Two, this state inspired the people’s in their resistance to fascism, it headed the struggle against the warmongers, was the initiator and organiser of the united front of peoples battling for freedom and peace.

And if after the victory of October, after the triumphant economic socialist construction, further evidence was required that Socialism meant salvation and the future of civilisation, that evidence was supplied by the Soviet Union during World War Two. That is why there is once again mobilised around the Soviet Union and the democratic and progressive forces of the world—a mobilisation on a scale surpassing that of the first years of the revolution. We have advanced a long way since then. The imperialist chain has snapped in a number of other countries, countries which have now become people’s democracies and which are on the high road to Socialism.

And in those countries that have not yet achieved this, the working class and democratic advanced units have grown into mass armies, capable of fighting for the people and of keeping contact with their people in all circumstances. In China and India, the peoples enslaved by imperialism are sundering and shedding the chains of slavery. Mankind has made a new leap forward towards its real aim, that is, towards ending capitalism; imperialism. And this was made possible because of the guidance which the very existence of the Soviet Union represents, because of the decisive cooperation of the peoples of the land of Socialism.

Our enemies are again grouping their forces. Enraged by our onward march, they plan restoring once more to the vile weapons of reaction and war. On that portion of the earth’s surface where, as yet, they retain power, there is disorder, strife, poverty for the working people and repression. The brazen clique of warmongers, the imperialists and the lackeys of imperialism, nurture the criminal design of repeating the adventure of Hitler and Mussolini. The struggle for peace remains on the order of the day a prime necessity for all peoples, who are anxious to preserve civilisation and their lives. But in this struggle we feel ourselves a hundred, a thousand times stronger than in the past, while in the hysterical outbursts of the imperialists, of their rulers, and the Social Democratic leaders who serve them, we see the signs of their growing weakness. And they, too, are conscious that with every passing day control over states and peoples is sleeping from their hands, their last hour approaching. We know that in order to ring in this last hour a new and all-out battle of the peoples for their freedom is necessary.

We also know that we possess the leader who will guarantee our victory. This leader is the country in which Socialism has triumphed, which is now advancing to Communism, and which stands as the decisive guardian of peace and of the liberty and independence of all peoples. This leader is the teaching of Marx-Engels-Lenin-Stalin, lighting up the path of the Party and people who were victorious in October 1917, and were able afterwards to overcome all obstacles and to smash all enemies.

Therein lies the decisive international significance of the October Revolution and its commemoration, which year by year is celebrated with ever greater inspiration. There in lies the source of our confidence in victory.

Palmiro Togliatti, 1893-1964, was an Italian communist leader, General Secretary of the Italian Communist Party from 1938 to 1964 and representative to the Third Communist International.