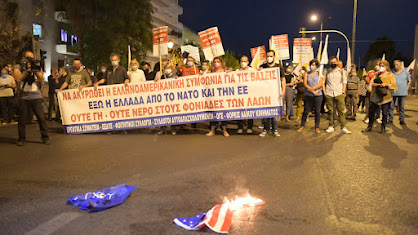 “Neither soil nor water to the murderers of the people”. With this slogan, thousands of working men and women, trade unions, the Greek Committee for International Detente and Peace (EEDYE), the Federation of Greek Women (OGE) and students' unions marched on Friday in Athens against NATO's Military Committee which convenes in the Greek capital on 17-19 September.

The protesters gathered at Eleftherias Square and then marched towards the U.S. embassy, denouncing the strengthening of the so-called Greece-USA “defense agreement” which turns the country into a vast US-NATO military base. The demonstrators called for the decisive organization of the struggle against the dangerous policy of the Greek government, against the country's involvement in the US-NATO imperialist plans which pose grave threats for the people.
The mobilization was attended by the General Secretary of the Communist Party of Greece (KKE) Dimitris Koutsoumbas who made the following statement:

“We are here today on the occasion of the NATO Military Committee's meeting and the Euro-Mediterranean Summit in Athens. Both events foretell new sufferings for the people at a time when all competitions are intensifying internationally, especially after yesterday's (on 16/9) agreement between the United States, Britain and Australia.

During the next period, until 2030, we will have an intensification of all military conflicts and interventions, new refugee flows. This is the forecast in an international scale. And from this point of view, the Greek government bears huge responsibilities because it leads the people to such war plans, it leads the country through NATO and, of course, especially with the expansion of the dangerous Greece-USA Agreement on Military Bases".