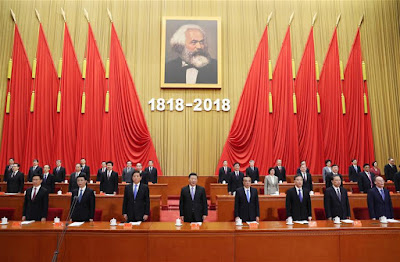 "It is perfectly right", underlined the Chinese President, "for history and the people to choose Marxism, as well as for the CPC to write Marxism on its own flag, to adhere to the principle of combining the fundamental principles of Marxism with China's reality, and continuously adapt Marxism to the Chinese context and the times."

From his side, Wang Huning, a member of the Standing Committee of the Political Bureau of the Communist Party of China (CPC) Central Committee, has stressed the importance of studying Chinese President Xi Jinping's speech commemorating Karl Marx.

However, President Xi's remarks about Marx and Marxism are contradictory to Chinese economy's course of capitalist transformation. The pro-market reforms that have taken place during the last decades in China and the adoption of a mixed economy have certainly no relation with Marx's perception of Socialism.

The decisions approved by the 19th Congress of the Communist Party of China in 2017 confirmed the passing of the country's economy in a new era, where the capitalist relations in production are strengthened even more. The so-called "Socialism with Chinese characteristics" consists of mixed forms of private and public ownership, in which the market plays a decisive role in allocating resources. 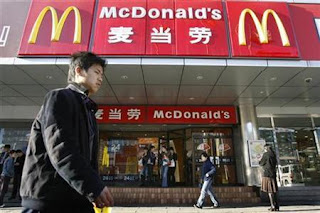 In fact, the "reforms" implemented by the Chinese government aim in modifying the market's mechanisms, in a way that will strengthen the large chinese business groups which are competing in the international capitalist stage with monopolies from other countries or group of countries, such as the U.S., the European Union, Russia, India, etc.

The current advancement of China's economy is based on the broadening of social inequalities, the exploitation of cheap labour and the deepening of the capitalist relations in all sectors of production. It is a fact that certain fundamental laws of socialist construction have been abolished and China is heading fast towards its transformation as a free market economy.

China not only participates actively in the international capitalist establishment but strengthens and consolidates its own economic presense and influence- through Chinese monopoly groups- in various parts of the world.

We are in no position to know how President Xi Jinping and the CPC perceive the teachings of Karl Marx, but one thing is certain: It's been a long time since China abandoned the fundamentals of Socialism creating the preconditions of negative long-term effects for the country's working masses.