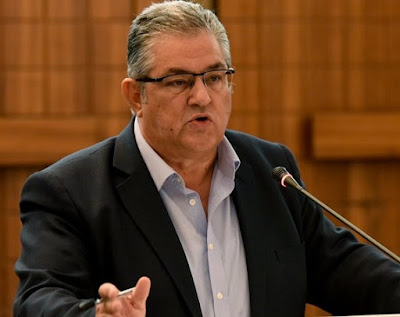 Dimitris Koutsoumbas continued by saying: "This escalated verbal aggressiveness, with the repeated statements of Turkish officials, has led to the specific actions that we are facing. As the situation goes on I believe that we will not avoid a “hot” incident, under the the primary responsibility of the Turkish policy but also of other allies of them who are behind this, because the economic interests are powerful. After all, we know that the war is the continuation of politics with more violent, military means”.

In the question “if the whole situation happens because of oil resources”, the General Secretary pointed out:

“It is the oil resources, hydrocarbons, all these, the attempt for co-exploitation in the Aegean and the Mediterranean, of the Cypriot EEZ, of the [oil and gas resources] fields in Eastern Mediterranean. And from this point of view we are highly concerned, because the Turkish bourgeois class, in relation with the Greek bourgeoisie and her government, has made a step forward on that. It already has occupation forces in three countries, apart from Cyprus, in Syria and Iraq, it has Turkish military bases- not just participation in NATO's or other multinational forces- in Somalia, Qatar and elsewhere, it trains Albanian army officers in Albania [and] therefore we are in such a situation...”.

In his interview, Dimitris Koutsoumbas condemned the- “yes men” towards the US, EU and NATO- policy of the SYRIZA-ANEL government, denounced the plans to install new US military bases in Greece and demanded the country's disengagement from NATO and the imperialist plans, as well as the closure of all US-NATO bases.