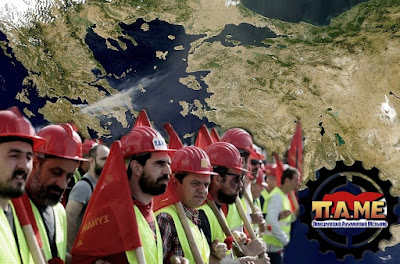 In a statement, the All-Workers Militant Front (PAME) expresses the solidarity and support of the class trade-unionist movement in Greece towards the Turkish working class and youth in their struggle against imperialism and authoritarianism.

"The class movement of Greece denounces the intensified repression with attacks and imprisonments of young militants, students who mobilize against the imperialist interventions and wars. We especially denounce the arrest of 22 students at Istanbul University who were campaigning against NATO and we demand the immediate withdrawal of all accusations against them.
The working class in Greece and Turkey, as well as the region's people, have nothing to gain from the clashes between imperialists for the zones of influence the markets, the sources of Energy.

PAME stands by the side of the Turkish people against the policies of the governments of Greece and Turkey, against the imperialist plans and NATO.

We call the trade unionist organisations in Greece to express their solidarity to the young militant students who are persecuted for their anti-imperialist activity".