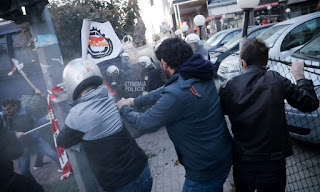 How did the government of SYRIZA respond to the thousands of workers, farmers, trade unions' members organized with PAME, students and other people who demonstrated against its antipeople-antiworkers policies in Thessaloniki? By ordering riot police to fire tear gas to protesters who wanted to express their disagreement with the "development fiestas" of Mr.Tsipras and his government!

More specifically, when the trade union's rally arrived at the area of the venue where the Prime Minister would deliver a speech, met strong police forces who had blocked the street.

The protesters remained in their positions shouting slogans, such as "Enough with illussions, either with the capital or with the workers", "With bats and riot police you hit the workers, while you held the bosses" and others.

The demonstrators denounced that repression and police violence goes hand by hand with the policy which crushes the working people and that the organized class-oriented labor movement will continue the daily struggle everywhere, in the streets, in every workplace, in every neighborhood.

The rally took place on the occasion of SYRIZA-ANEL government's conference, held in Thessaloniki, on "regional development" and "production reconstruction" in the Central Macedonia region.