"Yesterday's images in PAOK's stadium consist the mirror of the decay of football and big businessmen. What if the laws became stricter, what if foreign supervisors of UEFA came, what if the Greek Football Federation changed, what if professional judges were appointed? What remains is the "football" of the big businessmen who, under the tolerance and support of all governments - including the current one- play their own political and economic games on the backs of the teams and (football) fans. That is why the situation not only does not improve, but goes from bad to worse.


The championship's interruption by its own does not consist a solution to the problem. What is needed and now even more sports supporters understand is the abolition of business activity in football and in sports overall." 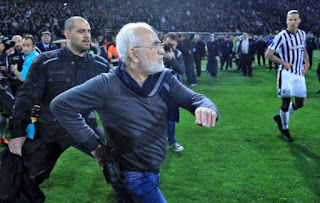 Yesterday's football match between PAOK Thessaloniki and AEK Athens in Toumba Stadium was interrupted when a disputed goal at the end of the game led to a pitch invasion by one of the team owners, who appeared to be carrying a gun. The referee signaled a goal for PAOK, but then seemed to disallow it for offside.

PAOK’s owner, Georgian-born businessman Ivan Savvidis, who in the past had been a member of the Russian Duma, came on the field twice and was accompanied by bodyguards. On the second occasion, without the overcoat he was wearing before, Savvidis appeared to be carrying a pistol which was in its holder. Savvidis made no move to use the weapon at any time. AEK officials claimed Savvidis threatened the referee during his first foray onto the pitch, before being pulled away.

The game was finally abandoned after more than two hours and the stadium emptied of fans. Adding to the widespread confusion, there were claims that the referee, Giorgos Kominis, had actually allowed the goal.

Today, after a meeting with Prime Minister Alexis Tsipras, the Deputy Minister of Sports Giorgos Vassiliades announced the temporary interruption of the Greek championship (Superleague).