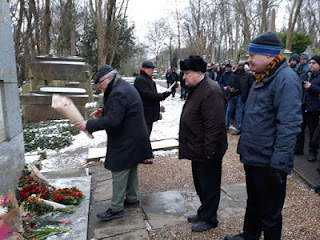 Marx was buried in the same grave as his wife in Highgate Cemetery; it was marked with a simple headstone in accordance with Marx’s wishes. In 1954 the grave was moved to a better position and it was decided to commission a more impressive tomb. The current monument, a bronze head atop a granite plinth, was designed and made by Laurence Bradshaw who was commissioned by the Communist Party of Great Britain (CPGB). It was unveiled by Harry Pollitt, General Secretary of the CPGB, in 1956.

The Marx Memorial Library is the trustee of the Marx monument in the cemetery and the event is organised by the Library, which was opened in 1933 with the aim of advancing education, knowledge and learning in all aspects of the science of Marxism, the history of socialism and the working class movement.

Library chair Alex Gordon opened the event to welcome everyone on the anniversary of Marx’s death. He was followed by the Cuban ambassador, Teresita Vicente Sotolongo, who delivered the oration on the life-long contribution that Marx made to the development of scientific socialism.

Andy Brooks, along with London comrades, laid the NCP’s floral tribute at the tomb together with a procession of other communist representatives that included diplomats from the Chinese and Cuban embassies, comrades from the Communist Party of Greece (KKE), the Progressive Party of Working People of Cyprus (AKEL), and many more from other workers’ parties in the Middle East and the rest of the world that have members studying or working in Britain.

Finally the {Internationale} was sung around the monument bedecked with dozens of wreathes and floral tributes. The comrades then departed – some to a reception at a nearby public house and others to brave the elements to get back home.