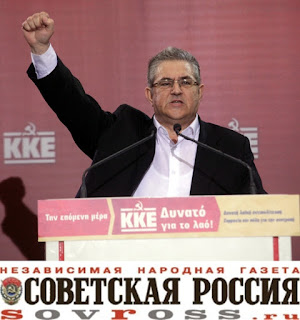 ARTICLE OF THE GS OF THE CC OF THE KKE DIMITRIS KOUTSOUMBAS IN THE RUSSIAN NEWSPAPER “SOVETSKAYA ROSSIYA”.
It is with particular joy that I address via the pages of the historical newspaper "Sovetskaya Rossiya" the workers of Russia, of the country where the "ice broke", as Lenin said, where "the way has been shown" as regards the revolutionary overthrow of capitalism and the construction of the new socialist-communist society.
The consequences of the counterrevolution and the overthrow of socialism did not cloud the eyes, mind and judgment of the communists of Greece, the KKE. Indeed on the 28th of December 1991, a few hours after the red flag was taken down from the Kremlin, Rizospastis, the journalistic organ of the CC of the KKE, wrote on its historic front page: "Comrades, hold the flag high! Hope is to be found in the struggles of the peoples"!
In 2017, the 100th anniversary of the Great October Socialist Revolution, was marked by the multifaceted activity of our party. Our party is one of the fruits of the revolutionary flame of October.
In our country hundreds of significant political and cultural activities in honour of the Socialist Revolution were carried out.
At the same time, we sought through our political and ideological activity, as well as our activity inside the trade unions and other mass popular organizations, defending the just cause of the working class, the other poor strata against the anti-people political line, to highlight the need for workers' power, which is the only real alternative to capitalist barbarity.
The communists of Greece fought to organize the struggle of the working class against the bourgeois government of the "new" social-democracy SYRiZA, which governs for the last 3 years with the support if a rightwing party, ANEL and with the backing of the EU, NATO, USA.
In difficult conditions of high unemployment caused by the capitalist crisis, the intensification of employer intimidation in the workplaces, government-state repression and undermining of the right to strike, the communists strived as best they could to organize major workers' struggles, demonstrations, nationwide strikes.
This struggle, beyond the various gains achieved by the workers in some sectors, such as in construction, in shipbuilding and repair and elsewhere, further strengthened the positions of the communists, of the class-oriented forces as a whole that struggle in the ranks of the All-workers' Militant Front (PAME).The class-oriented forces won over new forces. Today it is the second force in the trade union movement and the best organized.
In addition, the communists also actively mobilize amongst the poor farmers, who in 2017 had blocked the country's highways at 100 points for 40 days, struggling against the political line of the government and EU, which is driving them to ruin.
The same is true as regards the struggles of the petty bourgeois urban strata, the self-employed, and also the struggles of the women and youth with a working class-popular background.
It is no accident that KNE over the last 4 years has won the second position nationally in the elections for the student unions, with over 20%.
The communists, either in the Greek Parliament (the KKE has 15 MPs), or in the European Parliament (where we have 2 MEPs), or in the ranks of the thousands of people who have demonstrated many times for the workers'-people's rights, as well as outside the NATO bases and command centres, with a consistent stance against imperialist wars, against Greece's participation in them, against the transformation of our country into a launching pad for the promotion of the plans of the USA, NATO, EU in the Middle East, in Africa, in Ukraine, in the Black Sea and elsewhere. They took a position in favour of the country's disengagement from the imperialist unions of NATO and the EU, from all imperialist alliances, something that can only be guaranteed by workers' governance in Greece. Just as only workers' power can put an end to the anti-worker anti-people measures, socializing the means of production, with scientific planning of the economy and workers' control.
The 20th Congress of our party, which was held at the end of March 2017, engaged with question of how our party will become more effective in its activity. We set the bar even higher at this Congress. We set as an immediate task the strengthening of the KKE so that our party becomes more capable as a party of social revolution to realize its historical vanguard role. A party capable of leading the struggle of the working class and the entire people for the regroupment of the labour and trade union movement, the promotion of the Social Alliance in an anti-capitalist anti-monopoly direction, against imperialist wars, for workers' power.
Because we know very well that the October Revolution was not an "accident of history" or a "disastrous coup" of the Bolsheviks, as the bourgeois say and write, or an "immature and premature" revolution as every kind of renegade, opportunist and adventurist says and writes.
The October Revolution was a climactic world-historic event which signaled the beginning of an era in which the working class became the protagonist in the developments and pushed the wheel of history forwards, taking power and organizing new socialist communist relations of production, reshaping society as a whole.
This assessment is also valid today when we see capitalism in its imperialist stage dominant globally, as whatever socialist relations survive in some countries are remnants of the first attempt to construct socialism that began in 1917 and continued in various countries throughout the 20th century.
However, socialism continues to be as timely and necessary as ever in the history of humanity. And this, like the socialist character of the revolution in our era, does not depend on the contingent correlation of forces, but it emerges from the impasses of capitalism, the fact that the material preconditions for the passage to a new society have matured.

Today the inter-imperialist antagonisms have sharpened even further. The major contradictions over the division of the markets, the control of the natural resources, the transport routes for energy and commodities, geopolitical control. New alliances and blocs of forces are being created, increasing the danger of military conflicts.
In the framework of these conflicts, the international communist movement, each communist party must form its own line of battle. A line for the overthrow of the imperialist barbarity that brings economic crises, poverty, unemployment and wars or "peace" with a gun to the people's head. And this must be done by studying historical experience, rejecting mistaken analyses of previous decades that led revolutionary forces in society to passivity, ineffectiveness and confusion.
As the experience of October and the entire course of the revolutionary labour movement internationally demonstrated, there is no room for any cooperation-alliance with the bourgeois class as a whole or any of its sections in the name of defending bourgeois democracy, of "humanizing capitalism", of some intermediate stage to socialism or with the argument of avoiding some "extreme pro-war forces".
The bourgeoisie and the bourgeois power undermine and suppress workers' and people's rights, achievements. In their "peaceful conditions" they prepare wars. Τhe consolidation of the anti-capitalist-antimonopoly struggle, of the struggle for socialism requires the alliance of the working class with the poor farmers and the self-employed craftsmen.
The line of social democracy since the beginning of the previous century until today has completely failed, it has caused great damage, it led to the defeat of the revolutionary communist movement, it assimilated working masses in the capitalist exploitative system; it led militant, progressive forces in favour of social development to be disarmed. This, like the irreplaceable role of the CP emerges from our theory, which is Marxism-Leninism and proletarian internationalism.
Socialist construction as the first immature phase of the communist society highlighted the scientific laws that the revolutionary vanguard must be aware of and not violate so as to eradicate consciously and methodically the seeds of counterrevolution. More specifically, the theory and practical implementation of "market socialism" is disastrous for socialist construction, something that happened gradually in the USSR via the opportunist sliding over a period of time beginning in 1956 and violently manifesting itself in 1991, with the complete dissolution of the USSR and CPSU.
Historical experience has demonstrated that the problems that arose in the course of socialist construction were mistakenly interpreted as inherent weaknesses of central planning. The solution was sought in the expansion of market, which was a step backwards, instead of taking a step forward expanding and strengthening the socialist-communist relations of production.
Today, drawing the correct conclusions from our history, we become stronger. We are better ideologically and politically equipped for the class battles that we are waging and we will wage in the future. Our weapon is proletarian internationalism, our joint struggle, our class and comradely solidarity which is necessary against national isolationism and imperialist cosmopolitanism.
The KKE, which in 2018 will celebrate the 100th anniversary of its foundation, will follow the CPRF in hosting the International Meeting of Communist and Workers' Parties . We will seek with the 20th International Meeting that will be held in Athens, as well as with other forms, to contribute so that the international communist movement, which today is divided and faces major difficulties, to take steps towards its revolutionary regroupment, because this is its only positive prospect.
We wish the readers of "Sovetskaya Rossiya" health and strength for the new struggles of 2018. Our future is not capitalism, but the new world of socialist revolutions, of socialist-communist construction.
Best wishes to all!
Published 28/12/2017.
* * *
СТАТЬЯ ГЕНСЕКА ЦК КПГ В ГАЗЕТЕ «СОВЕТСКАЯ РОССИЯ»
ДИМИТРИС КУЦУМБАС: ИЗВЛЕКАЕМ УРОКИ, СТАНОВИМСЯ СИЛЬНЕЕ 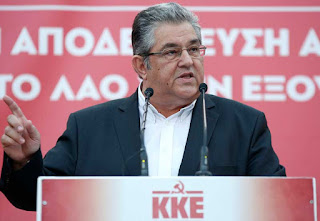 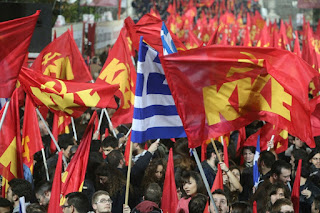