Greek state budget: Tsipras' government is doing the "dirty job" on behalf of the capitalists 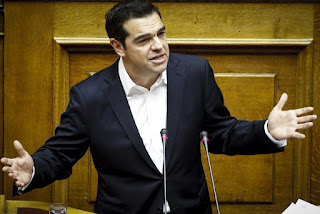 Speaking yesterday in the Parliament during the discussion on state budget, Prime Minister Tsipras developed the narrative of "post-memorandums Greece", while presenting his government as the most capable to guarantee the recovery of the capitalists' profitability.

PM Tsipras, bypassing the class content and character of the 2018 state budget- which, like the previous ones consists a tool for the implementation of the strategy of the capital, by attacking people's rights, cutting social spending, providing even more tax exemptions to large business groups, etc- said with certainly that "this is the last memorandum budget, we are now doing different things with different results".


Tsipras himself admitted that, among other things, his government "has implemented reforms that nobody ever dared to make". In order to support his narrative, the Prime Minister referred to the congratulations that the SYRIZA-ANEL government received from its "partners", the EU institutions and the markets. In fact, despite his claims about the so-called "fair development" that is coming, PM Tsipras actually confirmed that the antipeople-antiworker attack will continue and will be extended in the "post-memorandum" period.

In his speech about the state budget, Alexis Tsipras assured the capitalists that the SYRIZA government will respect all the antipeople-antiworker commitments it undertook in order to "consolidate its positive achievements". But the question is the following: Positive achievements for whom? Tsipras himself gave the answer: "The end of the memorandums does not consist words of propaganda but a common place for the markets, the investors, the international bond credit rating businesses".

The PM didn't hide that he is committed in continuing the antipeople-antiworkers policy for the benefit of the large capital. He announced that the SYRIZA-ANEL government will implement additional measures in order to support large business groups and create a better investment environment, through new programs of supporting businessmen and measures for a powerful banking system. He pledged to provide "liguidity" to the banks, something that has already began through the ongoing auctions against people's houses.

NEW DEMOCRACY: "WE ARE BETTER SUPPORTERS OF THE CAPITAL". 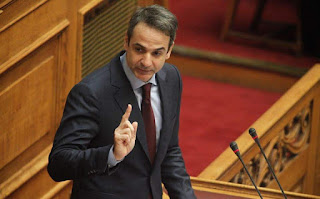 Within the above framework, the political "dogfight" between the government and the opposition party of New Democracy took place. The substance of the argument between them is who can serve the recovery the capital's profitability in the most efficient way.

Tsipras and Mitsotakis blamed each other in a... race about who is the most credible servant of the capitalists and who could implement, in best possible way, the antipeople measures (also known as "reforms").

In this context, the President of New Democracy Kyriakos Mitsotakis reiterated his claim that he himself as well as his party are ready to take the leadership of the bourgeois political management, away from the "bonds of suffocating taxation", by creating a "smaller and more effective" state for the needs of the large business groups and by attracting "investments" through new and more privileges towards the capitalists. "Greece needs a daring plan of radical reconstruction and a determined leadership  that will implement it without hesitations" Mitsotakis said, stating that he is ready to implement- better than Tsipras- the plans of the capital.