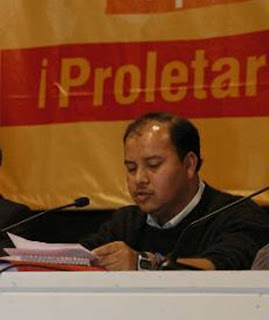 ICP: In the recent years, violence in Mexico, both related to drug trafficking groups, or as a part of a clearly paramilitary activity against the progressive forces, organizations and people and especially the communists has been on the rise. Your Party, PCM has also suffered attacks of these paramilitary forces. What are the causes of this wave of violence and what will be the consequences of this situation in the context of the class struggle? Can you also comment on the relation of this situation with the U.S. imperialism that never ceased to mark its presence in Mexico?

Pavel Blanco: First of all, I would like to send my brotherly greetings to the Communist Party of Turkey, with whom we share the same line in the revolutionary regrouping of the international communist movement. We will do everything to reiterate our solidarity on the face of the political events that violently convulse the class struggle there.

In Mexico it is possible to literally observe the face of capitalism that Marx was speaking of. It drips mud and blood from all its pores. The wave of violence that shakes us with more than 200,000 dead in 10 years is not a system failure. Rather, it is the logical consequence of capitalism that consists of barbarianism, terror, uncertainties, hunger and death. The so-called war of narco-trafficking, in which the Mexican state is directly involved, is a process of re-accommodation of markets, routes and stakeholders in order to control this business, which is laundered rapidly through financial investments, and sectors such as the real estate and production. Here we don’t only refer to the agricultural industry but also to the branches such as metals, mechanics, iron and steel and extractivism. So, it is a process of amplification of accumulation and a new economic branch that rapidly generates consequences for politics. The money buys the political parties, candidates, elected state officers, mayors, MPs, senators and governors, all of which strongly influence the presidency of the republic.


In this context, it is necessary to plant terror, demobilize and immobilize the people in order to prevent any kind of possibility of protest and opposition to the plundering of the country. It is imperative to avoid the popular or syndical organizations that would prevent the processes of overexploitation.

It is very striking that they force displacement of populations that decimate cities such as Ciudad Juarez or desolate towns and territories such as in Tamaulipas. Paradoxically, after the expulsion of the inhabitants and destruction of their houses and lands, they found oil wells and mine zones in these places.

The popular organizations are under the threat of state terror. For example, look at the class-based demands of the educational workers, or the Federation of the Socialist Peasant Students of Mexico, 43 of which disappeared in Ayotzinapa, and of course the Communist Party of Mexico. Five of our comrades including Raymundo Velazquez, who was the political secretary of the party in that region, were assassinated in Guerrero because they were opposing the Canadian mines there. Moreover, Enrique Lopez, who is a member of our Central Committee, has disappeared in Tamaulipas. In addition to a number of prisoners, we also have comrades passing through judicial processes. We would like to clarify that this is the consequence of having a specific position in the class struggle, in other words, fighting for the revolution. Only those who do nothing are at the margin of the possibility of suffering these strikes.

It is true that the North American imperialism has big interests and that since the late 1970s they promoted the narcotic operations on Mexico. They did it in collaboration with Colombian groups to finance their fight against the insurgent movements in Nicaragua and in other Central American countries. This is not a secret. Moreover, we should underline the presence of the Chinese capital in the important harbor of Lázaro Cárdenas in Michoacán, where they exchange steel with the chemicals used in the production of the raw material of a number of drugs.

At this point we would like to stop and think about this theoretical and practical question: In Mexico and for sure in almost all Latin America imperialism is identified with North America, and this position constantly creates deep political errors and strategic problems. The Communist Party of Mexico has the idea that imperialism as the actual phase of capitalism and characterized by monopoly capitalism also means that imperialism is not only an exterior but also an interior phenomena.  Speaking of the North American imperialism shouldn’t make one forget about the fight against the EU as an imperialist center or the inter-imperialist pact between Russia and China. Neither can other pacts between states or between capitalist economies such as MERCOSUR can be considered with sympathy. For us, the anti-imperialist fight is not an anti-North American fight. Rather, it is a fight against monopolies and we fight by confronting the monopolies in our country and in any other imperialist core. There is no “less bad” imperialism, all mean exploitation, pillage, plundering, war and death

ICP: There are millions of Mexican citizens and descendants of Mexicans in the United States, whose vast majority is part of the working class in this country. U.S. has never been an example of integration and acceptance but in the recent years the xenophobia and racism have increased even further and Mexicans, as the largest immigrant group, are one of the primary targets of xenophobia and racism. What is your opinion on the presence and role of Mexican workers in the struggle waged by the U.S. working class and the class character of the xenophobia?

PB: There are about 20 million Mexican or of Mexican origin workers in the US, and the number increases day by day, and year by year; it is our duty to contribute to raise awareness and organization of this population; during the bourgeois democratic revolutionary process in the last century, the Mexican workers of the USA were a stronghold of the anti-dictatorship fight which politically and financially supported the revolutionary forces of our country; phenomenon of migration peaked with the Second World War, and depending on the need for workforce, the North American border and the anti-immigrant mechanisms become more flexible or more harsh. The xenophobia and racism has been raging, not only against the Mexican workers but also workers of all nationalities who risk their lives in pursuit of employment there. It is PCM’s duty to fight to organize the Mexican workers to support the revolutionary process in our country and also to intervene in the class struggle for their rights and claims along with the North American workers and workers of other nationalities, who are exploited in the US. This happens by having a party organization at the borders, with which we’re moving forward, and for starting to have PCM cells among the Mexican workers in the US. It is clear that the class character of racism is one of the ideological pillars of the imperialist domination, which attacks all the workers. 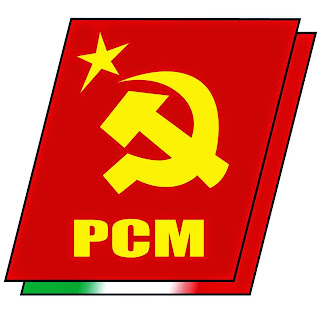 ICP: Donald Trump is now officially the Republican candidate for the presidential elections, He is known for its anti-immigrant, anti-worker and racist rhetoric, towards the Mexicans in particular. What awaits the Mexican workers in the U.S. if Donald Trump is elected? The question can be asked for the working class in Mexico.

PB: Whoever wins the elections, may it be Mrs. Clinton or Trump, the loosing side will be the North American workers and the workers from other nationalities that shape the immigrant labor force. Trump resembles a scarecrow that is destined to express: "vote the lesser evil, vote the democrats", which we consider to be a very dangerous position. Democrats or Republicans, the bourgeois parties of the USA do politics that are functional to imperialism. We already saw the fall of the myth, which claimed that it was a system only for the white; and the Obama administration turned out to be such an aggressive warmonger that it has no reason to envy Obama’s predecessor Bush. Now we will see how the myth, which claims that with a woman leading the USA, the world would go in a better direction, also crushes and falls. This is delusion, purely delusion.

No to Clinton and No to Trump, and we lament the wrongful politics done by CPUSA that navigates the opportunist flag of choosing a lesser evil. Whoever wins, will be a sworn enemy of the workers of the USA and the peoples of the world.

ICP: As the violence and repression increases in Mexico, the resistance of progressive forces and communists intensifies in response. We realize there is a revolutionary potential in the objective conditions in Mexico. What are the challenges, opportunities and the potential of revolutionary politics in Mexico?"

PB: That is true, the class struggle intensifies and the class conflict is present and evident. The labor-capital antagonism crystalizes especially wit the so-called structural reforms applied by the Mexican State, which embrace measures that devalue the labor and seek stability in the middle of the economic crisis.

We consider that the conditions are mature for a revolutionary process that according to our evaluation will be an anti-capitalist and anti-monopolist one with the goal of socialism-communism. We believe that a major obstacle at the moment is the mismatch between the objective bases, the limits of capitalism and subjective conditions of the moment, which are delaying; that is why since the V. Congress of PCM we are working to resolve this issue in two directions: building a strong, class-based workers and syndical movement on the one hand; and the development of the party itself in the principal strategic areas of the economy.

We are aware of the fact that without a strong communist party no revolutionary process would have any possibility to be successful.

Where are other revolutionary or anti-capitalist forces in Mexico, but none of them puts the proletariat in the center of their activity; in PCM we insist that the working class will be the epicenter of the revolutionary transformation; that is our advantage. Some words about an ingredient that is necessary for the revolutionary processes: the unity. We do not see it as a mere unification of organizations but as the unity of the class, we work exactly for that every day in every single work place.