Communist Party, Turkey (KP): Letter to the Peoples of the World - Down with Imperialism!

LETTER FROM TURKEY TO THE PEOPLES OF THE WORLD.
Source: http://www.kp.org.tr
The Central Committee of Communist Party, Turkey (KP) released a declaration for the peoples of the world in the aftermath of the July 15 coup attempt in Turkey:
"We witnessed an attempted coup in Turkey on the night of July 15. Despite its oddnesses, obscurities and uncertainties about the actors behind it, this was a genuine coup attempt.
That Fethullah Gülen was behind the coup and that Fethullah Gülen has deep ties with the U.S. administration are facts. Additionally, there were more than a few traces of Pentagon and CIA behind the coup attempt.
The failure of this attempted coup is to the benefit of our people. If the coup had succeeded, the working people already burdened with all the imaginable problems laid on them by the capitalist system would have had to face heavier and more destructive conditions. One needs to keep in mind that the coup plotters have a pro-NATO and Islamist orientation and they have been serving the international monopolies for decades. 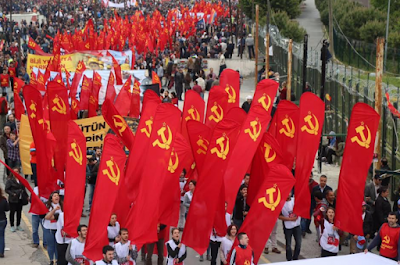 
5 – Is it possible for capitalism and bourgeois politics in Turkey normalize in near future?

No doubt that there is not any “normal” capitalism for the working class politics. Yet the term “normalization” refers to a more or less steady regime, which is able to manage possible crisis while the system of exploitation continues to exist.

In the aftermath of the coup, such a normalization seems unlikely in Turkey. This is more related to the elusive position of the Turkish bourgeoisie along imperialist powers than to AKP’s hopes of a dictatorship.

Imperialist centers, which stayed silent during the coup began unwillingly to announce their support for the “elected government” as the failure of the attempt became clear. However, media organizations dependent on such centers began to expose their real purposes.

At this point, it is likely that the NATO and US will not let Erdogan in peace and unless a very particular kind of compromise is achieved, they will try to discharge him. The AKP under Erdogan rule is experiencing the fear of that.

They are afraid of assassinations, a new coup, instability, and even a foreign intervention. Shortly before the coup attempt, there were claims about the lack of security for the nuclear weapons in Incirlik Base. Nowadays, pro-AKP media reflects worries about an escalation of Alevi-Sunni conflict or of the war with Kurdish separationists.

On the other hand, Erdogan and his associates are also facing with the threat of an international trial for their corruption.

Furthermore, there is the risk of an economic crisis. The economic instruments of imperialism, international credit institutions lowered Turkey’s grade. However, Turkey’s economy is so intertwined with imperialist system that such an intervention has limits due to the risk of triggering a larger depression. Thus we should consider that they do not control everything and a crisis with economic aspects is possible.

In sum, a normalization with political “stability” seems to take some time. What they intend is to build this up on the basis of a larger consensus within bourgeois politics. Yet the position of Turkish bourgeoisie seems to keep its fragile nature with crisis potential.

6 – Is it possible for Turkey to shift towards the Russia-Iran axis?

There is a tendency among Turkish bourgeoisie to develop relations with Russia and Iran based on mutual interests, and to make long-term strategic agreements. Yet, when Russian state’s class character is taken into consideration, this would not mean a shift of axis including ideological aspects, which could be possible during Soviet period. The main reason behind such a tendency is the profit maximizing impulse of Turkish monopolies.

Moreover, Turkish bourgeoisie must have considered the possibility of a war between the Russian and American blocs, given the military preparations and provocations of the US, which would lead Turkey into a catastrophe as a country in the frontline. Nevertheless, it seems very unlikely for Turkey to break off with US/EU axis.

European countries continue to be the largest market for Turkey. Financial system of Turkey is integrated to Western finance monopolies to a very large extent. Also, Turkish capital did quite a number of joint investments, notably in automotive sector, together with Western monopolies in Turkey.

Turkish Armed Forces is dependent to NATO for almost 70 years now. So it would be a big mistake to consider the only pro-NATO elements in the TAF are Gulenists.

In these circumstances, AKP and other bourgeois actors will possibly pursue conciliation, with or without Erdogan. Such conciliation would continue NATO membership and EU negotiations whereas searching for a relative autonomy in international relations.

Despite all these, it seems doubtful that they will manage to find grounds for such conciliation under the escalating tension –even to armed measures- between blocs. Although Erdogan received some political and economic support from Russia in the aftermath of the coup, affording a radical shift of axis seems impossible for Turkish bourgeoisie in short or middle terms.