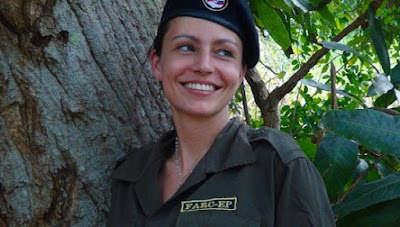 That’s because the Dutch national has been fighting within Colombia’s FARC guerilla army for 14 years. After living in the jungle in FARC camps for about a decade, for the last four years Nariño has played a key role in the peace process in Havana, Cuba, that aims to transition Colombia out of the longstanding internal conflict and toward a new era of peace.


But though Nariño, also known as Tanja Nijmeijer, is from the Netherlands, she says her reasons for deciding to take up arms as part of the left-wing rebel movement were the same as those that pushed her Colombian fellow combatants to join — a claim she admits may be hard for many to believe.

“I came to Colombia, I saw the injustice and I felt that something had to be done,” Nariño told teleSUR from Havana, the site of the peace talks. “The only difference might be that I didn’t really live the injustice … I saw the state violence, but I didn’t suffer it.”

Nariño joined the FARC in 2002 after being impacted by the level of inequality and state-sanctioned human rights abuses in Colombia during a year-long stint as an English teacher in 1998. “I think for me it was just enough to know that people (are) suffering to make the decision to join and show my solidarity with them,” she said.

At the time, the armed conflict was in full swing. The notorious United Self-Defense Forces of Colombia, an illegal paramilitary militia also known as AUC, had launched in the previous year and established a cold-blooded reputation by brutally slaughtering at least 30 people in an attack known as the Mapiripan Massacre in July 1998. A U.S. State Department report on human rights in Colombia the same year documented ongoing problems of extrajudicial killings, forced disappearances, attacks on civilians by paramilitaries and some cases of “social cleansing” at the hands of police.

Nearly a decade and a half later, Nariño remains committed to the fight that “has always been a political struggle,” saying that her “awareness that there’s still a lot to be done” has kept her in the FARC all these years. She’s also optimistic about the much-anticipated new phase dawning on the country through the peace process, which she sees as offering new spaces in the “struggle for a just society,” including the FARC’s participation in electoral politics.

The FARC, or Revolutionary Armed Forces of Colombia, formed as a rebel army connected to the Colombian Communist Party in 1964 in the wake of a bloody ten-year conflict between Liberals and Conservatives that ravaged mostly rural areas and gave way to a crackdown on self-organized communist communities. The guerrilla uprising was founded on revolutionary Marxist and anti-imperialist demands for agrarian reform and defending the rights of rural peasants. After more than 50 years, these continue to be central issues on the FARC’s agenda and and have formed important cornerstones of the peace process that began in Havana in 2012. “War can become all consuming … but I don’t think that this means that you lose the sense of what you’re fighting for,” said Nariño in reference to how the movement has stayed connected to its roots after all these years.

She added that political education and consciousness-building is part of “daily life” in the FARC. One internal process has been developing the movement with respect to gender equality in response to the “machismo” that pervades mainstream Colombian society. Women make up nearly 40 percent of the FARC, and while progress has been made, the issue remains an ongoing “everyday” struggle. “In Colombian society you wouldn’t find a community or a group where men and women cook, wash their clothes, go to combat, carry heavy loads, etc.,” said Nariño “In the jungle, everything is on an equal basis. But, this doesn’t mean we don’t have to keep working on it.” A gender perspective has also been incorporated in the peace agreements with a special subcommission in the negotiations process.

The talks in Havana have achieved landmark partial deals on issues of transitional justice, rights of victims, agrarian reform, crop substitution for coca production, and other matters. Earlier this year, the two sides of the conflict signed a historic bilateral cease-fire agreement, a key step in bringing an end to the war that has claimed over 220,000 lives and uprooted some 6.3 million people, mostly Indigenous and Afro-Colombian.

“Sometimes I feel a little sad when think of all the people who were comrades of mine who died in the jungle, and now I think they could have made a huge contribution here in Havana and of course in the construction of a new country,” said Nariño. “That is difficult for me to accept … They were young people who could have contributed a lot.” But for Nariño, there’s a lot of reason to be optimistic. “I know how Colombian people have suffered the conflict, and I think it means an opportunity for everyone to start the construction of a new country, to start a new page in the book of history of Colombia,” she said.

Despite being on the much-heralded brink of peace, important challenges remain. Outstanding issues at the negotiation table include the future political participation of the FARC, the reincorporation of demobilized rebels into society, and other important end-of-conflict measures. Meanwhile, former President Uribe has been fearmongering with far-right rhetoric and pushing for a “No” vote in the plebiscite on the peace agreement, expected within months of signing the deal. “It doesn’t make any sense to vote against peace,” argued Nariño, saying that Colombia’s “extreme-right” has used a series of “false slogans” to obscure the many positive aspects of the peace agreements, from plans for land redistribution to substituting illicit coca production for other crops and specialized peace tribunals to try alleged war criminals. 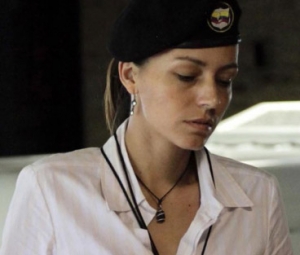 The plebiscite on the peace agreement will need to secure a 13 percent threshold to pass. Even in the unlikely event that Colombians vote down the deal, a “No” vote would not mean that the government could reopen negotiations with the FARC on specific issues, the government’s lead negotiator Humberto de la Calle has said.

Even after the peace accords are finally signed, which could happen as early as in a matter of weeks, many challenges will of course remain to rebuild the society ravaged by over five decades of conflict.
“I think that the main challenge for Colombian society will be reconciliation,” said Nariño, pointing to what she described as two divergent Colombias that must be reunited to offer opportunities and provide for the basic needs of all, not just a privileged sector of society. “We will keep on working for reconciliation, social justice and peace in Colombia and we'll make sure that those two Colombias disappear and become one.”

But the road to this point has not been easy. Nariño says it’s a “pretty tough life” in the FARC and that she has “suffered the stigma” like other rebel fighters nationally and internationally. She argues that the media, especially in Colombia, has had a role in whipping up this contempt while also showing a “lack of teaching peace” in society. The Dutch rebel fighter faces terrorism charges in the U.S., while her home country of the Netherlands recently approved a law that allows the country to revoke the citizenship of citizens who join so-called terrorist organizations abroad. Both the United States and European Union list the FARC as a terrorist organization.

In Colombia, the FARC and other guerrilla groups have evidently faced harsh criticism over the years, such as accusations of alleged forced recruitment of child soldiers. The organization has denied the charges, maintaining that the forces accepted young victims while highlighting the conditions of war that often force people to make hard choices. Earlier this year, the FARC banned all recruits under 18 years old and agreed to send home all soldiers under 15.

“We know that in Colombia the situation for children is very tough, and that many times they seek refuge in our camps, sometimes even younger than 15,” said Nariño, singling out examples such as paramilitary violence, domestic violence, and lack of access to education and housing as situations of desperation that push young people into the guerrilla. “But we as the FARC also know of course that war is not a scenario for children to live in and we were more than willing to make this decision as a gesture towards the construction of peace.” 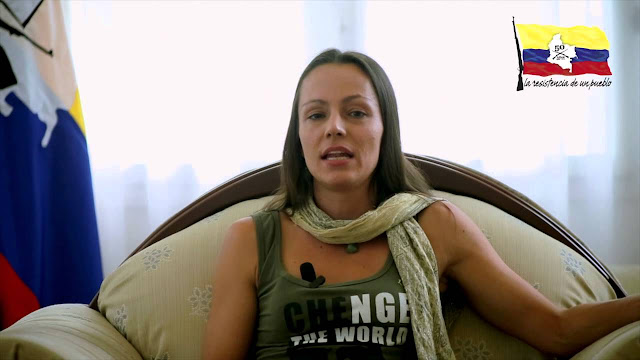 That construction of peace, though, is only in its infancy as Latin America’s longest-running civil war draws to a close. “We have said many times that peace is not only decided by weapons,” Nariño added. “It is a long term construction and it should involve social justice, opportunities, employment, healthcare, housing, dignified living conditions for everyone.” The country is home to the world’s second-largest population of internationally displaced people after Syria.

The FARC now has around 8,000 combatants, down from some 20,000 or more at its peak in the 1990’s. The country’s smaller rebel army, the National Liberation Army or ELN, founded at the same time as the FARC, currently has some 3,000 members and has not launched a formal peace process with the government. Colombia has fought the left-wing guerrillas and the so-called “war on drugs” with heavy militarization backed by the United States’ US$10 billion in military aid over 15 years of Plan Colombia. Presidents Barack Obama and Juan Manuel Santos announced a new Plan Colombia 2.0 earlier this year, called Paz Colombia, which is set to pour some US$450 million into Colombia for a total of up to US$4.5 billion over 10 years.

But as the government locks in military aid in the year Santos has heralded as the “year of peace” and the FARC prepares to disarm and start to participate in politics legally, what’s next for the FARC’s Dutch rebel fighter and top peace negotiator at this historic turning point for Colombia remains uncertain. “In a general way I can say that I will keep up the struggle for justice in Colombia and also in the world,” said Nariño. “What exactly I will do depends on what is needed.”