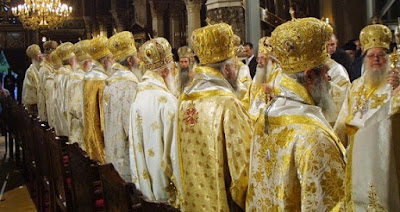 The reactionary and regressive role of the Church of Greece through history is, more or less, known. Since the formation of the independent Greek state in 1830, the Orthodox Church has been always part of the establishment- from the Ottoman rule to the formation of the Kingdom of Greece and from the 1940s Nazi occupation to the 1967-1974 military dictatorship, the leadership of the Greek Orthodox Church played its role as a staunch ally of the established order.


Having said the above, let's proceed to the article's major issue: the existence of extreme, hate speech in the high rankings of today's Greek Orthodox Church. If you think that hate speech is an exclusive characteristic of the ISIS assassins, of neo-Nazis and far-right racist groups in Europe and the USA, you are wrong. Just a day ago, in an outburst of racist rhetoric, Bishop Marcos of Chios said: “There are no refugees; they are all illegal immigrants”. Such anti-refugee, anti-immigration statements have been quite frequent within the high rankings of the Church, especially after the beginning of the refugee crisis in the Aegean Sea. The case of Bishop Marcos comes as another episode of xenophobic, racist hate statements by high ranking priests.

They are paid as priviledged civil servants, they dress with expensive and flamboyant vestments, they move around with luxurious cars and security guards- this is the “humble” life for the vast majority of the “Holy Synod” members. In the following text, we will see three cases of prominent Greek Orthodox clergymen who have championed in bigotry, racism and hate against minorities, immigrants, refugees, LGBT people and all those who they regard as “enemies of Orthodoxy”. 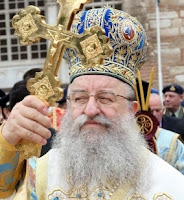 Anthimos, the Metropolitan of Thessaloniki, is a high-profile priest of the Orthodox Church in Greece and a favorite figure for Greek media. Broadly known for his ultra-nationalist, ultra-conservative stance in numerous social issues, Anthimos frequently speaks against muslim immigrants in his sermons. Last February, Anthimos was among the major organizers of an anti-immigration, anti-refugee gathering in Thessaloniki, in which he was also the keynote speaker. In a xenophobic rant aganst refugees, Anthimos said that Greece faces the threat of “islamization” because of the large number of muslim refugees who remain in the country. On August 2014, Metropolitan Anthimos had fiercely reacted against the foundation of an Islamic Studies faculty at Thessaloniki's Aristotle University. “This attempt is, according to my opinion and the feeling of Thessaloniki's people, a criminal act” he said.

Anthimos frequently transforms his sermons into nationalist political speeches. On May 2015, in one of his usual sermons, he unleashed an attack against Greece's neighbouring people, including Turks, Albanians and Slavs who- according to him- want to conquer parts of Greek territory.

The racist rhetoric of Anthimos isn't limited to refugees, immigrants and neighboring countries. The LGBT movement has been in his target numerous times- he has publicly called homosexuality a “deadly sin”, being a fierce critic of the city's annual Pride Festival which he regards as a “disgrace and provocation”. Last year, he publicly called Orthodox Christians to participate in a vigil against the Gay Pride.
Although he has denounced “all forms of dictatorships”, Anthimos has publicly refered to the period of the brutal military dictatorship (1967-1974) as “the era of Greece's strongest economy”.

The Metropolitan of Piraeus, Seraphim, is known for his openly anti-semitic, homophobic rhetoric. In a TV interview in 2010, Seraphim burst into a conspiracy rant “Adolf Hitler was an instrument of world Zionism and was financed from the renowned Rothschild family with the sole purpose of convincing the Jews to leave the shores of Europe and go to Israel to establish the new Empire”.

In 2012, Seraphim- along with MPs from the Nazi-fascist 'Golden Dawn' party- filled a lawsuit against the production of the theatrical play “Corpus Christi” which depicts Jesus Christ and his apostles as gay. The Bishop of Piraeus had lodged a lawsuit, charging those who involved in the play for “insulting religion” and... “malicious blasphemy”.

Except from his anti-semitism and his (formerly) close ties with Golden Dawn's neo-Nazi criminals, Seraphim is known for his extreme homophobic rants. According to the Metropolitan of Piraeus, homosexuality is the “dirtiest of all sins” (April 2015).

Bishop Amvrosios of Kalavryta and Aegialea is currently the most extreme case of hate and racist speech within the high rankings of the Church of Greece. A champion of far-right rhetoric, Amvrosios has a known fascist past: During the military dictatorship (1967-1974) he was Chief of the so-called “religious department” of the gendarmerie. For those who perhaps do not know, the gendarmerie was the dictatorship's instrument of persecutions, severe violence and torture against democratic fighters, leftists, communists etc. He is widely regarded as a “priest in the service of Junta”. He has publicly expressed admiration for the notorious fascist assassin Nikos Dertilis (1920-2013), a Junta colonel. 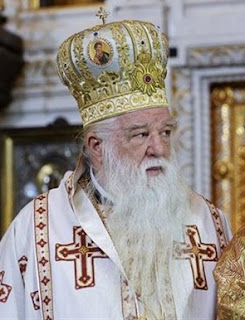 Amvrosios has openly expressed his support for the Nazi-criminal organisation of 'Golden Dawn'. “If you change your style, i.e. if you become mature, you will be able to become a sweet hope for the desperate citizens and a quiet force in the rotten political system” he wrote in his personal blog in 2012. When the neo-Nazi thugs opened their party branch in the town of Egio, Metropolitan Amvrosios sent a letter of advise to Golden Dawn's members on how to improve their style and actions.

In 2015, Amvrosios unleashed a homophobic rant in one of his blog texts. He wrote about homosexuals, among other things: “They are not human! They are freaks of nature! Mentally and spiritually sick! They are mentally insane! Don’t hesitate, then! Wherever you see them, spit on them! Don’t leave them in peace! They are dangerous!”.

Last May, during the liturgy of Easter's Good Friday, Amvrosios publicly cursed those who eat meat during Good Friday (a day of complete feast for Orthodox Christians) by saying: “May they get a hole in their stomachs”. In the same delirium of hate he called upon God to “rot the hand” of Education Minister if he appends his signature to measures downgrading the school's religious instructions.

This “representative of God” has also a word for the refugees, which he calls “islamists”! “We don't like their culture! We don't accept their religion! We don't want our territory to be infected” he wrote on his blog, calling the authorities to take the needed measures against the... islamist hordes.