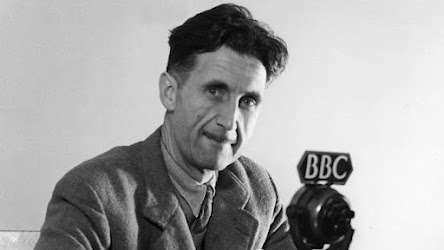 A few days ago, the name of George Orwell came to the spotlight during a discussion in the Greek Parliament. In one of their usual dogfights, Prime Minister Mitsotakis and major opposition-Syriza leader Tsipras referred to Orwell's concept of “totalitarianism” in order to attack each other. Mitsotakis quoted the novelist's aversion towards “left totalitarianism”, while Tsipras replied that his party has always been critical towards the actually existing socialism. Their reference to Orwell is no accidental: Despite their particular differences, bourgeois politicians find themselves on the same camp when it comes to anti-communism.

Eric Arthur Blair, commonly known as George Orwell, has been a symbol of enmity against the 20th century socialism. Under the pretext of “anti-totalitarianism”, conservatives, neoliberals, social democrats, progressive leftists and opportunists have idolized Orwell as an uncompromising intellectual who deserves to be respected. His famous allegorical novella, the “Animal Farm”, is considered a masterpiece of literature against Stalin's “totalitarian regime” in the Soviet Union. The so-called Orwell Foundation, based in London, which aims “to perpetuate the achievements of the British writer George Orwell” runs the Orwell Prize seeking to reward books and journalism that “making political writing into an art”.

However, the reality about Blair is quite different from the one the bourgeois propaganda presents. Orwell wasn't merely anti-stalinist or anti-soviet; he was an anti-communist who became an informer on behalf of the British intelligence agencies.

A former officer of the Indian Imperial Police in Burma, Blair joined the collaborationist trotskyite Workers' Party of Marxist Unification (POUM) during the Spanish Civil War, fighting against communists and anti-fascists. Orwell's participation in POUM shaped his fiercely anti-communist views, covered under the burden of “anti-stalinism”. Between 1941 and 1943, in the midst of the Second World War, he worked in the BBC's Eastern Service. During this period, he wrote a review for Hitler's “Mein Kampf” where he shamelessly admitted: “I should like to put it on record that I have never been able to dislike Hitler”.

Although the bourgeois propaganda presents him as an “anti-fascist”, Orwell's hostility was directed primarily against socialism-communism. His much celebrated works, like the “Homage to Catalonia”, “Animal Farm” and “1984” are deeply anti-communist novels aiming to slander the construction of socialism in the Soviet Union and the other socialist states. For this very reason, his works were enthusiastically promoted by the ruling bourgeoisie of the large imperialist countries (US, Britain, Western Europe). Orwell's novels had a prominent position in the cultural warfare unleashed by the CIA against the Soviet Union. According to CIA historian Michael Warner, following Orwell's death in 1950, the Central Intelligence Agency negotiated with his widow the making of US government-funded propagandistic films based on “Animal Farm” and “1984”.

Eric Arthur Blair wasn't only a reactionary anti-communist novelist and journalist; he was also an informer of the British intelligence agencies. In 1949 Orwell handed over to the Information Research Department (IRD) of the British Foreign Office a list of 38 people, among them intellectuals and artists, who were considered to be communist sympathizers. The intermediary between Blair and IRD was a friend of Orwell called Celia Kirwan who was working in the Foreign Office as an assistant of notorious anti-communist Robert Conquest.

The list remained a secret until 1996, when file FO 111/189 of the Foreign Office became accessible under the Thirty-year Declassification Act. In June 2003, newspaper “The Guardian” published a copy of Orwell's list, verifying his role as an informant of Britain's intelligence agencies. Among the names found in the list were those of Charlie Chaplin, J.B. Priestley, E.H. Carr, Sir Michael Redgrave. In his notebook, Orwell had also included the names of Katharine Hepburn, Cecil Day-Lewis, Paul Robeson, George Bernard Shaw, John Steinbeck, Orson Wells and others. As journalist and writer Alexander Cockburn wrote once, Orwell's list was “a snitch list” that revealed the novelist's bigotry towards Jews, blacks and homosexuals. It is characteristic that in his notebook, Orwell uses words and phrases like “crypto-communist”, “sentimental sympathizer”, “tendency to homosexuality”, “very anti-white”, “Jew”, etc, next to the names of the enlisted personalities.

Now, let's ask ourselves: Why do the bourgeois mechanisms, from mass media to historiography, consistently promote George Orwell and his works? Why do they present him as a “saint” of democratic values and anti-totalitarianism? Orwell's rabid anti-stalinism isn't enough to explain the bourgeoisie's love for him. The answer is clear: Eric Arthur Blair was a committed and staunch anti-communist who devoted his writing talent in the fight against socialism-communism. Keep this in mind next time you hear someone praising the “Animal Farm”, “1984” and other Orwell's works.