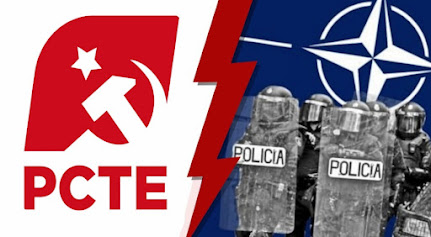 Madrid has become a “fortress city” for the needs of the NATO Summit which will take place between 28-30 June. In a statement the Press Office of the Communist Party of the Workers of Spain (PCTE) denounces the social democratic government of Pedro Sánchez for suspending “basic rights and freedoms in order to shield Madrid before and during the NATO Summit”.

It is reminded that PCTE and its youth wing, the Collectives of Communist Youth (CJC), organize an anti-imperialist protest, against NATO Summit, on Sunday 26 June in Atocha, Madrid.
The full statement (here in Spanish) reads:

The PCTE denounces the fact that the Government of Spain, through its Ministry of Interior, suspends basic rights and freedoms in order to shield Madrid before and during the NATO Summit.

This measure is part of a broader operation, known as “Operation Eirene”, which involves the largest police deployment and control in the country's recent history, the suspension of the Schengen Agreement and the discretionary possibility of prohibiting access to Spain of citizens of other EU countries.

Under the argument of the protection of the governmental delegations participating in the Summit of the Atlantic Alliance, a series of restrictive measures of the most fundamental freedoms are adopted, confirming once again that the freedoms and rights proclaimed by the EU and its member-states are dead letter, depending on the “reasons of state” that are appropriate at any given time.

These measures are accompanied by an evident campaign of informative intoxication on the mobilizations that will be held during these days in Madrid against the NATO Summit, aiming at criminalizing the anti-NATO movement as whole, at a time when the Government of Spain has decided to increase its presence and contribution to the imperialist organization.