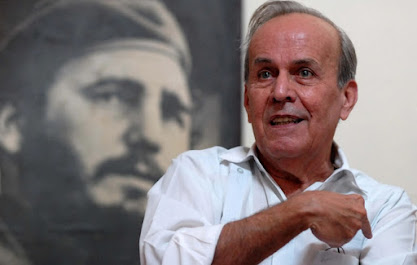 Veteran Cuban diplomat, revolutionary and politician Ricardo Alarcón passed away on Sunday 1st May in Havana, close to his 85th birthday.

On Twitter, President Miguel Diaz-Canel Bermudez acknowledged Alarcón as a "great patriot and brilliant diplomat of the Cuban Revolution, whose work he defended with passion and solid arguments, making our people proud.  Cuba mourns his departure".

On Facebook, the hero of the republic, Gernando Hernandez, described the moment in which they learned the news al Revolution Square.

"This morning, in the square, shocked by the news, we the Five hugged in honor of Ricardo Alarcón. The history of our case could not be told without mentioning him. He was our best lawyer. Our sincere condolences to his family and friends" wrote Hernandez.

“To the Master of the diplomats of our generation, we will always keep deep respect, admiration and immense affection. Thank you for the privilege and honor of having been his disciples,” Deputy Foreign Minister Josefina Vidal wrote on her Facebook account.

His example and work remain as his legacy to current and future generations of Cubans. “Death is not true when the work of life has been well fulfilled: Jose Marti,” is another message circulating on social media by renowned journalist Humberto Lopez.

Alarcón is remembered as a “true revolutionary; for his anti-imperialism, his loyalty to Fidel and Raul, to the Party and the people,” Lopez concluded his post.

Born in Havana on 21 May 1937, Alarcón became active in Fidel's "26th of July Movement", assisting in the organization of the student apparatus of the guerrilla organization's youth brigade.

In 1992 he was made Minister of Foreign Affairs, and in February 1993, he became the President of the National Assembly, a position he held until 2013.

Among others, Alarcón played an important role in the 2000 case of the then seven-years old Cuban Elián González, a custody and immigration controversy involving the governments of Cuba and the United States.