"Seven decades ago, Greece and Turkey joined the imperialist organization NATO, established by the United States and its Western European allies.

NATO, as the political-military arm of American and European imperialism, aimed at the Soviet Union and the other countries that were striving to build socialism in Europe, and to strengthen and shield the power of capital in each of its member states.

With the accession of Turkey and Greece to NATO, its so-called “southeastern wing” was formed, for confrontation with the USSR and then with the Warsaw Defense Pact, which went against imperialist plans. They sought to exploit the geopolitical position of the two states and their military capabilities in order to advance imperialist aspirations in a wider region (the Balkans, the Black Sea, the Eastern Mediterranean, the Middle East, Caucasus). In this direction, the US and NATO “planted” the two countries with military bases, in the name of “protecting the democratic world from communism”. They supported with all means the attack of the bourgeoisie against the two peoples, the suppression of every democratic and trade union right by the bourgeois military regimes, which were imposed on Turkey and Greece. In addition, Turkish and Greek soldiers were called upon to shed their blood for foreign interests in NATO imperialist wars, such as the war in Korea and most recently in Afghanistan.

The joint accession of the two countries was presented as a way out for a common peaceful future of the two peoples. Developments to date have disproved these claims. NATO, which does not recognize internal borders, not only did not resolve bilateral issues, but complicated them and acted in support of the arms race, military conflicts, nationalism, all that the bourgeoisie cultivates, dividing the peoples.

Today, NATO still exists, despite the dissolution of the USSR, of the Warsaw Pact, having played a leading role in the contradictions that are evident within the imperialist system between the forces of Euro-Atlanticism and the new powerful capitalist powers, such as China and Russia. Turkey and Greece, despite the declarations of an “independent” and “multidimensional” policy, continue to be involved in the plans of the NATO imperialist organization. They take an active part in military exercises to encircle Russia, have become NATO strongholds against other peoples while, on the other hand, a target of retaliation for its rivals. It is in the context of this inter-imperialist competition that Russia’s military intervention in Ukraine took place, pouring oil onto the fire of imperialist wars.

In these conditions, the Communist Parties of Greece and Turkey:

— Demand an end to our countries’ involvement in NATO imperialist plans, such as the encirclement of Russia.
— We demand the closure of US and NATO bases in Turkey and Greece.
— We struggle for the disengagement of the two countries from NATO and any imperialist union, with the peoples masters in their land.
— We fight against any military confrontation for the interests of the bourgeoisie and the imperialist alliances!
— We fight against the huge military expenditures of the two countries, which create an environment encouraging war, and against any heated incident and war conflict between the two countries.
— We wage a struggle against border violations and challenge the international treaties that have defined the borders in the region. To not change the borders and the Treaties that define them.

The Communist Party of Greece and Turkey, under our common banner, proletarian internationalism, call upon the working class and the other popular strata to intensify their struggle against NATO, in general against the plans of the bourgeoisie and the imperialist alliances, against nationalism and racism, to strengthen the message that the two neighboring peoples can and must live peacefully!

The contemporary struggle against NATO, against every imperialist union is a struggle for peace, the friendship of peoples, against class exploitation, capitalist barbarity, for the new socialist-communist society.
24 February 2022".
Also read: 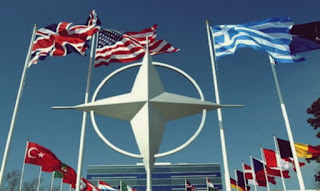