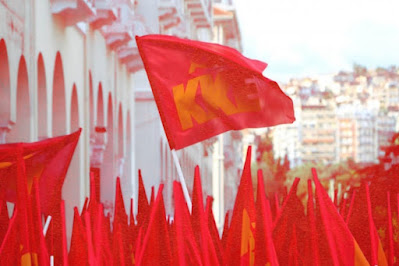 Every time a Communist Party compromised the aim of workers' power in order to participate (or support) a “progressive”, “left-wing”, “anti-capitalist”, “anti-fascist” etc, bourgeois government the results were utterly disappointing, leading to ideological degeneration and disintegration of the workers-popular movement.

A few days ago, the Portuguese Communist Party (PCP), a party with significant history, paid the price of its participation in the “progressive” government of the Socialists, by receiving a rather disappointing 4.4% and four seats in the legislative elections. This result marks an almost 2% loss compared to the 2019 election.

In the elections held last October in Czech Republic, the Communist Party of Bohemia and Moravia (KSČM) received a bitter 3.62% of the votes thus failing to enter the Parliament for first time since 1948. That was the outcome of KSČM's decision to back the government of Andrej Babis in 2018.

The above two cases are characteristic examples of Communist Parties which yielded to the “temptation” of participating in a bourgeois government, under the illusion that through this way they can serve the people's interests. The same strategy was followed recently by the Communist Party of Chile which actively supported the social democratic alliance “Apruebo Dignidad” during last December presidential elections. Now, cadres of the Chilean Communist Party are ready to assume official positions in Gabriel Boric' government.

The root of the problem lies in the perception that capitalism can be reformed in favor of the working masses. If we go back in the beginning of the 20th century, we will see Lenin's fierce struggle against the then reformist theories (like Bernstein's) which were promoting the idea of society's transformation through reforms instead of revolution. The 20th Congress of the Communist Party of the Soviet Union (CPSU), held in 1956, adopted a series of revisionist policies, including the one of “peaceful transition to socialism”, thus spreading the illusion that there can be a “parliamentary transition” from capitalism to socialism. Apparently, the adoption of this strategy caused great damage to the international communist movement.

The rise of euro-communism was the offspring of blatant ideological distortions of Marxism, according to which communists could transform the bourgeois state towards a pro-worker, pro-people direction through the “expansion of democracy”. No revolution would be needed; just reforms which would eventually change the nature of the state. However, this reactionary theory ignored the very nature of the bourgeois state as an organ for the domination of the bourgeois class. Instead, it considered the state as a neutral “collection of institutions” that can be transformed “from within” for the benefit of the masses.

In his work "The German Ideology" Karl Marx analyzes how the bourgeois state is presented as something alien to the bourgeois class: "To this modern private property corresponds the modern State (...)Through the emancipation of private property from the community, the State has become a separate entity, beside and outside civil society; but it is nothing more than the form of organization which the bourgeois necessarily adopt both for internal and external purposes, for the mutual guarantee of their property and interests... Since the State is the form in which the individuals of a ruling class assert their common interests, and in which the whole civil society of an epoch is epitomized, it follows that the State mediates in the formation of all common institutions and that the institutions receive a political form" (Part I: Feuerbach: Opposition of the Materialist and Idealist Outlook, C. The Real Basis of Ideology).

In his masterpiece "State and the Revolution", Lenin elaborated further Marx's theory, revealing the necessity to smash the bourgeois state as a precondition for the victory of the proletariat. He highlighted that there is no "pure" democracy, but class democracy. On the basis of capitalist relations of production, even the most developed, progressive parliamentary democracy cannot exceed the limits of bourgeois domination over the working class. As Lenin wrote even the most democratic bourgeois republic is nothing more than an apparatus for the oppression of the working class by the bourgeoisie, of the mass of workers by a handful of capitalists.

The dominance of euro-communist ideology in Western Europe in the 1970s led major Communist Parties (Italy, France, Spain) to collaborate with social democratic forces (e.g. the participation of PCF in Francois Mitterrand's government). This strategy subsequently led to the ideological mutation of these Communist Parties and the annihilation of the labour movement. Historic parties with a background of heroic struggles abandoned Marxism-Leninism and proletarian internationalism thus becoming a political “tail” of social democracy. A characteristic case is the Communist Party of Spain (PCE) which, still, remains politically attached to social democracy and participates in the government of the Socialist Workers' Party (PSOE).

“The issue of participation or support of CPs in “left” and “progressive” governments emerging in the context of managing capitalism, continues to be a crucial point in the ideological–political confrontations. First of all, for the reason that the Parties following this political stance with various ideological constructs, such as the “humanization” of capitalism, the “democratization” of the EU, the “stages to socialism”, and the so-called rupture with right-wing policy, foster illusions about managing capitalism, whitewash the dirty role of social democracy, and focus their criticism on a form of bourgeois management, i.e. neoliberalism. Such forces overlook and disparage the laws governing the capitalist economy and the de facto and irrevocably reactionary character of the bourgeois state, which cannot be negated with any kind of bourgeois management formula. These forces defer the struggle for socialism for the “long-term prospect” and in practice assume enormous responsibilities to the peoples as they renounce the arduous daily work of mobilizing social forces that have an interest in clashing with monopolies and capitalism.”

The position of the KKE during the 2012-2015 period, when the Party firmly declined to support or participate in a “left government” with SYRIZA, consists a political legacy of immense strategic importance for the international communist movement. It wouldn't be an exaggeration to say that the persistent refusal of the KKE to resort to opportunism and become an accessory to the anti-worker, anti-people policies of the SYRIZA government is a beacon for Marxists-Leninists throughout the world, for all those revolutionaries who remain loyal to the Leninist ideological heritage.

The mission of the Communist Parties is to play a leading role in the development of class struggle against capitalism and monopolies, to regroup and organize the labour movement towards the achievement of workers' power. Every retreat by a Communist Party from the independent organizational, ideological and political struggle, every form of support to bourgeois governments, causes serious damage to the vital interests of the working class movement. The Communist Parties have no reason, whatsoever, to participate in the manipulation of popular masses and to spread illusions that a bourgeois government (no matter if it is headed by left, social democratic, centrist or liberal parties) can serve both the interests of the monopolies and the needs of the working people.

The issue of communists support or participation in bourgeois governments is crucial and needs to be studied deeply by the Communist Parties all over the world, having as a guide the Marxist-Leninist theory. The problem lies in the strategy of the “stages” which view socialism as a distant, almost invisible, vision and not as a timely necessity. This erroneous strategy leads Communist Parties to set aside the struggle for the overthrow of capitalism and to seek ways of reforming the exploitative system.

As the contradictions of the capitalist system are getting more and more intense, the duty of the Communist Parties is to correspond effectively to their historic mission as the vanguard of the working class movement, forming a clear strategy of rupture with the power of the monopolies and imperialism. Thirty years since the counterrevolutionary events in the Soviet Union and Eastern Europe there is no room for ideological maneuvers that lead to class compromise. History has shown that only the people can save the people when they decisively walk the path of revolutionary overthrow, to take the helm of power in their own hands.