KKE honors the victims of the Holocaust 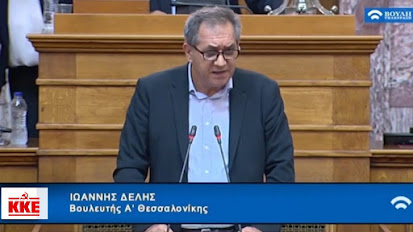 With immense respect the Communist Party of Greece (KKE) honors the victims of the Holocaust, noted KKE MP Giannis Delis during a special session in the Parliament dedicated to the Memory of the Jewish Holocaust.

As Delis pointed out, the millions of dead Jews during the Second Imperialist World War, stand by the 20 million dead Soviet people, alongside the liberation movements of the people of Europe who fought against the occupiers, next to the victims of Kandanos, Kalavrita, Distomo, Kommeno, next to the executed fighters of Chaidari and Kesariani.
MP Delis underlined that the KKE has a historic duty to honor the victims of the Holocaust, because it led the organization of the struggle against the occupiers, being the major contributor and leader of EAM, ELAS, EPON and other EAM-based organizations, offering thousands of its members for the liberation of the homeland.

The KKE deputy noted that many Greek Jews joined EAM and its organizations which played a significant role in their rescue. He said that the memory of the Holocaust victims is alive and teaches the younger generations the horrors that the competition among capitalist states and the inter-imperialist rivalries can lead to. Closing his speech, Delis stressed out that the best honor in their memory is the contemporary struggle for the country's disengagement from imperialist alliances and the struggle for the overthrow of capitalist barbarism.