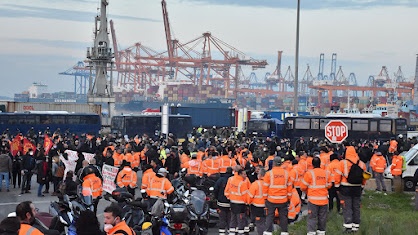 “We will not yield to their intimidation, no worker shall stand alone, not a step back from the right to strike and the defence of our rights” is the message sent by the COSCO workers who are on strike at the Piraeus port in Greece.

“The strike is extremely successful. Very few workers have gone to work, who will soon join us”, announced the administrative board of ENEDEP (Container Handling Workers’ Trade Union at the Piers of Piraeus).

The strikers call on all COSCO workers of all shifts and all workers overall to go to the port and be on their side. Many workers from other sectors are already at the port expressing their solidarity.

From the very first moment, MPs and cadres of the Communist Party (KKE) have been by the side of the strikers.

It is estimated that from a total of 2,200 workers only 50 of them went to work today.

Last October, 46-year-old dockworker Dimitris Daglis had been fatally injured at pier 2 at the COSCO-owned Piraeus Container Station, when he was fatally hit by a crane bridge. Having received a wave of solidarity by workers and trade unions throughout the country, ENEDEP proceeded to seven-days of strike, demanding safety measures by the company. The outcome of the mobilizations was victorious for the dockworkers.