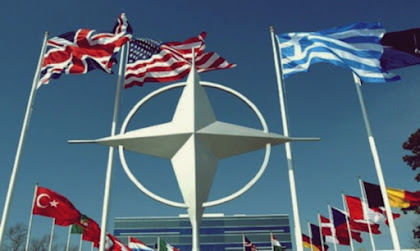 The 18th February marks a black anniversary for the Greek people. It was 70 years ago, in 1952, when the Greek Parliament ratified Greece's accession in the North Atlantic Treaty Organization, the infamous imperialist alliance of NATO.

This anniversary comes in a period when the imperialist competitions in Ukraine have reached a very critical stage and the clouds of a generalized military confrontation are gathering over the broader region.

Greece's NATO membership in 1952 transformed the country into a vast base for the dangerous, adventurous plans of the imperialists, mainly directed against the Soviet Union and the other socialist countries. At the same time, it was a decision that led the Greek people in very dangerous situations with poignant results (e.g. Turkish invasion in Cyprus in 1974) which, seven decades later, continue to afflict the Greek foreign policy.

The accession of Greece in NATO consisted a conscious strategic choice of the Greek bourgeois class and her political parties. This choice can be explained within the historical framework of the then political, social and economic conditions, taking into account the following factors: a) The existence in the international stage of two rival socio-economic systems (Capitalism vs Socialism), b) The decisive contribution of the British and U.S (post-1947) imperialists in the defeat of the heroic communist-led Democratic Army of Greece during the 1946-1949 Civil War, c) The aim of Greek bourgeois class to guarantee and upgrade her role in the imperialist system through the country's active participation in the Euroatlantic military plans.

For the Greek bourgeoisie, the country's accession to NATO was a significant factor for the consolidation of her power, but also a security measure against any possible future effort to overthrow her. The Plastiras-Venizelos' government and the rest bourgeois political powers, which led the country's accession to NATO's imperialist wolf-pack alliance, were arguing that Greece's NATO membership was providing an “overpowering protection shield” and that the “large atlantic alliance” would, supposedly, secure the nation's territorial integrity and sovereignty.

However, what has been proven beyond doubt, is that NATO was a “protection shield” for the interests of the domestic bourgeoisie against the “internal enemy”, the people, thus consolidating the deeper involvement of Greece's ruling class in the predatory imperialist plans of her American and European allies.

From the very first time, although operating in extremely difficult conditions of illegality and persecutions by the bourgeois state, the Communist Party of Greece (KKE) had clearly denounced Greece's accession to NATO. Over the years, the KKE developed a consistent struggle against the imperialist plans, highlighting the need for Greece's disengagement from the North Atlantic Treaty Organization.

Among others, the decision of the 2nd Plenary of the Central Committee of the KKE in 1951, was stressing out:

"Instead of peace, reconstruction and well-being that monarcho-fascism promised, the people are being drowned in distress and misery. The people's children are slaughtered in Korea. The economic situation is literally disastrous. Greece's binding in the North Atlantic Treaty makes the immediate threat for a generalized slaughter visible."

Greece, as a NATO member-state, like neighboring Turkey, became a military stronghold of the Euroatlantic alliance in the southern borders of the socialist camp. Within this framework, Papagos' government agreed in 1953 to permit the installation of U.S military bases which were later used for the implementation of a series of imperialist wars. Before 1991, the target of these plans were the socialist countries and after the counterrevolution in the USSR and Eastern Europe they were transformed into criminal military interventions in the Balkans (Yugoslavia), the Middle East (Gulf War, Afghanistan, Iraq, Syria, etc) and North Africa (Libya).

A review of the 70 years of Greece's NATO membership unveils that the accession of the country in the North Atlantic imperialist alliance did not benefit the people, as bourgeois politicians and analysts shamelessly argue but, on the contrary, it became a source of great suffering and tragedies: From the September 1955 anti-Greek Istanbul pogrom, the US-NATO role during the 1967-1974 military Junta, the 1974 Turkish invasion in Cyprus, the 1996 Imia crisis in Aegean until to the transformation of Greece into a base for war crimes against other people (Bombing of Yugoslavia, Gulf War, Iraq, Afghanistan, Libya, Syria, etc).

Through its political representatives and its well-paid journalists, the bourgeoisie declares that Greece's accession to NATO led to the defense of the country's sovereign rights. What a huge lie. On the contrary, by joining NATO, Greece was deeply involved in the dangerous competitions for the share of markets and spheres of influence by capitalist states. The Greek territory became a vast NATO base, with foreign military installations from Crete to Alexandroupolis, while Greece spends approximately 4 billion euros (2.6% of GDP) annually for NATO military expenses, being second among NATO member-states after the United States.

All the post-War governments bear extremely heavy responsibilities for the enormous dangers that the Greek people face as a consequence of NATO membership. All the bourgeois parties that governed in the past, including the conservative New Democracy and the social democratic parties PASOK and SYRIZA, have contributed to the transformation of Greece into a bastion of Euroatlantic imperialist aggression. No one can forget that the previous “government of the Left”, headed by SYRIZA, became a flag-bearer of US-NATO interests in the region, launching the so-called “Strategic dialogue” between Greece and the U.S. for the expansion of NATO military bases on Greek territory. The same policy is followed by the current government of New Democracy which deepens the country's involvement in imperialist plans by expanding the Greek-US agreement for  military bases, deploying Greek military personnel in NATO missions abroad (e.g. Sahel) and implementing new large armament programme.

Seventy years later, the legacy of NATO for the Greek people is summarized in three words: Juntas, wars, terrorism. Today, in a period of intensification of inter-imperialist competitions, the fight for the disengagement of Greece from NATO and every imperialist alliance, within the framework of the struggle for workers-people's power, is more necessary and relevant than ever.