KKE on Lisbon Treaty's 10th anniversary: "The people of Europe have no reason to celebrate" 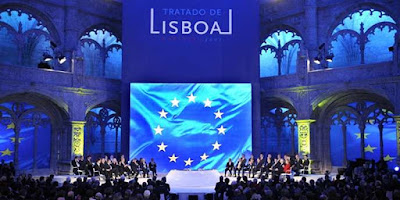 On the occasion of the 10th anniversary of the Lisbon Treaty and the "EU Charter of Fundamental Rights", the Press Bureau of the CC of the Communist Party of Greece (KKE) issued a statement in which it points out that the people of Europe have no reason to celebrate, adding that "the euro-treaties are nothing but shackes with which the EU and the governments chain the working people to the chariot of the capital's interests".

More specifically, the statement which was published on "Rizospastis", points out the following:


“While the EU “celebrates” the 10th anniversary of the Lisbon Treaty and the EU “Charter of Fundamental Rights”, the people not only have no reason to celebrate but they draw valuable conclusions for the anti-people EU one-way street that has been built at their expense. The discussions regarding the 10th anniversary of these reactionary treaties do not focus in the past but mainly towards an even more reactionary future that they are planning for the people.

The experience of the people in the last 10 years totally vindicates the predictions and the substantiated critique of the KKE, which pointed out in time that the Lisbon Treaty would strengthen even further the anti-people and reactionary nature of the EU against them. The Commom Defense Policy, the enhanced military co-operation (PESCO), the new intervention funds strengthened the militarization of the EU and the aggression of european monopolies in their fierce confrontation with the other imperialist centers and powers. This is evidenced by the EU imperialist interventions, all these years, for the interests of the EU business groups, in Syria, Libya, Ukraine, Mali, in Central Africal Republic, in the broader region of SE Mediterranean and Northern Africa.

The policy of the EU and its economic military relations with Turkey reinforce Turkish aggression, as it is expressed by the dangerous situation that has been formed for the people in the Aegean and East Mediterranean, with the repeated violations and provocations in the Aegean, the transgression of the Cypriot EEZ and the maintenance of occupation in Cyprus.

At the same time, the Treaty of Lisbon equipped the EU and the governments with new, more barbaric means and mechanisms of promotion of the anti-people policy: State budget control, the EU Semester and long-term memorandums, “reforms support programme”, enhanced surveillance and mandatory “cutters” of social spending for the slashing of wages and pensions. It enlarged the existing ones and created new mechanisms of repression (Europolice, European Border and Coastal Guard, EU prosecutor, etc), made even more stifling the restriction of people's freedoms and rights by multiplying of bodies and tools of electronic profiling, strengthening of anti-communism and persecutions against Communist Parties. It transformed the Mediterranean into a watery grave for thousands of displaced refugees and immigrants and its member-states, especially Greece, into contentration camps and mass entrapment of inhumane conditions.

The only rights that the so-called EU “Charter of Fundamental Rights”, which accompanied the Lisbon Treaty, actually guarantees are the “sacred” and “inviolable” property of the capitalists and the capital's freedom of movement. The peak of that is the recognition and affirmation of counter-strike (lockout) of the employers, so that they can hit the right to strike, which has also been the target of Greek governments; today by New Democracy (ND) and previously by SYRIZA.

In all its member-states, the EU and the governments demolish workers' rights, public Social Security and Welfare, every social right such as free public Education and Health. Basic social goods and services (Energy, Transporation, Communications) are converted into expensive commodities and handed over to monopolies.

The euro-treaties are nothing but shackles, with which the EU and the governments chain the working people to the chariot of the capital's interests. The growing mistrust towards the EU […] can strengthen, deepen and target its very nature as a union of capital that cannot be improved and become pro-people.

When the people decide, they have the power to free themselves from the tyranny of the monopolies, with disengagement from the alliances, such as EU and NATO, taking the power and the economy in their own hands, in order to buld another Europe of peace, friendship, for the mutually beneficial cooperation of the people, a Europe of people's progress and prosperity, of socialism”.