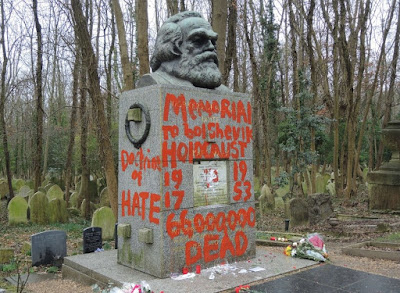 
The plaque was first used on the grave of Marx’s wife, Jenny von Westphalen, in 1881 and was moved when the remains of Marx and his wife were exhumed and reinterred in a more prominent location in the cemetery in 1954.
The monument is owned by the Marx Grave Trust, which is represented by the Marx Memorial Library in Clerkenwell.
Highgate Cemetery tweeted that the memorial had been vandalised in a “Senseless. Stupid. Ignorant” attack.
Seems that 136 years since his biological death, the legacy of Karl Marx- the most significant thinker in history and father of scientific socialism- continues to scare the various stooges of capitalism.
The filthy cowards who vandalized his grave can possibly destroy plaques and marbles, but they cannot destroy the great legacy and the ideas of Marx. They cannot stop the course of history towards Socialism-Communism. The rotten capitalist system will be overthrown.
IN DEFENSE OF COMMUNISM ©