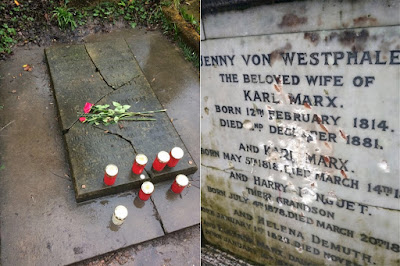 Karl Marx died 136 years ago, but his legacy continues to scare the puppets of capitalism.
The founder of scientific socialism and writer of the "Capital"- the greatest philosopher in human history- remains a nightmare for the bourgeoisie and her stooges.
That is why they try to vilify Marxism, Socialism and Communism in any possible way.
This time, some cowards decided to vandalize the tomb of Karl Marx at London's Highgate cemetery, in a targeted attack that means the Grade I-listed monument will “never be the same again”, the Guardian newspaper reports.
The suspected vandal damaged a marble plaque which was taken from Marx’s original 1883 gravestone and incorporated into the 1954 monument.


Images of the defaced memorial, which attracts tens of thousands of visitors each year, show what appears to be damage done by a hammer to the lettering of Marx’s name and the marble on which it is mounted.
Ian Dungavell, the chief executive of the Friends of Highgate Cemetery Trust, condemned the attack as “an appalling thing to do” and a “particularly inarticulate form of political comment”, warning that the tomb would be permanently scarred.
The police were called to the scene on Monday afternoon. Dungavell said no other graves at the cemetery had been damaged in the attack.
Speaking to the Guardian he said: “We think it was deliberately targeted against Karl Marx. It was not random. You can see from the photograph that the person has really done their best to obliterate Karl Marx’s name."
IN DEFENSE OF COMMUNISM ©