The KKE Poliburo statement points out that "this policy bears the stamp of the SYRIZA-ANEL government which has become the best servant of the imperialist plans. For the interests of the Greek capital, which asserts a share from "pie" of the markets, energy routes, raw materials, thus involving the country and the Greek people in the dangerous competitions that are sharpening, especially between the USA-NATO and Russia, with unpredictable consequences for the people".

"SYRIZA cannot hide behind the allegedly personal views of Defense Minister P. Kammenos. The extension of  the Souda base, the transfer of drones in Larisa, the installation of a base for US helicopters in Alexandroupolis, the planning for the transfer of "special weapons" to Araxos etc, are measures that are already being implemented by the government, in agreement with the New Democracy (ND) and the other parties" adds the statement.

The KKE Poliburo mentions that "these plans are served by the government, when it gives 2% of the GDP (4 billion euros) every year for the NATO projects, at a moment when the people are suffering, when it sends Greek troops abroad in NATO missions and drills, when it has a leading role in the integration of new countries in NATO and the EU, like it did in the Agreement with FYROM", adding that "this policy is not in the interest of the people and the youth. The US-NATO-EU are not factors of security and stability" and that "their bases are not built to protect the country and her borders, as some argue, but to act as bases of war and interventions, in order to safeguard the interests of energy monopolies. They will transform Greece into a "magnet" of possible attacks". 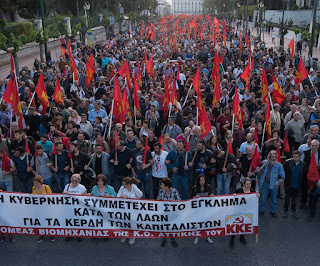 In its statement, the KKE also notes that "the participation of our country all these years in NATO and the EU, the presence of NATO bases in Greece, not only did not prevent, but on the contrary aggravated Turkish agression. NATO does not recognize borders in the Aegean, considering it a single operating space. It plays the role of "Pontius Pilate" in the Greek-Turkish disputes".

"That is why", writes the statement of the Poliburo, "the struggle against the imperialist war must be strengthened. Greece must not be used as a base of the imperialists. The Souda base, as well as all foreign bases in Greece, must be closed down. The Greek soldiers who are on missions abroad must return home. The struggle for disengagement from NATO and the EU must be invigorated. The common struggle and solidarity of the people against the imperialist war and the system that creates it must be strengthened".