The murder of Jamal Khashoggi highlights the hypocrisy of the imperialists 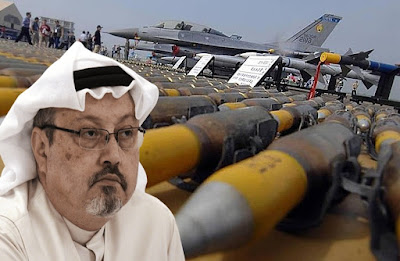 The alleged murder of Jamal Khashoggi, a Saudi journalist, in the Consulate of Saudi Arabia in Istanbul has made headlines. A Washington Post writer and a former newspaper editor in Saudi Arabia, Khashoggi had been an advisor of Prince Turki al-Faisal, former Saudi intelligence chief, and has also been close to billionaire investor Prince Alwaleed bin Talal.

According to Middle East specialists, there are deeper subplots played into Khashoggi’s death — ties to Saudi intelligence and his relationship with the Islamist group known as "the Muslim Brotherhood". Saudi Crown Prince Mohammed bin Salman branded the Muslim Brotherhood a terrorist organization.


Since the Saudi authorities acknnowledged that Khashoggi was murdered in Istanbul, various imperialist powers such as the U.S, Germany, France and Britain have threatened to halt arms sales to Riyadh, asking for clarifications regarding the assassination of the journalist. This is hypocrisy of the highest level.

In a statement regarding the issue, the World Federation of Trade Unions (WFTU) points out the following: "The fact of assassination of a man in a consulate of a country, namely the murder of Jamal Khashoggi at the consulate of Saudi Arabia in Istanbul, Turkey, once again highlights the hypocrisy of the imperialists and their governments."

In the words … there is an international outrage over the murder, “disappointment”, calls to shed light on the case, demands for European countries to stop arms sales to Saudi Arabia, ministerial meetings, threats of “strict punishment” against Saudi Arabia and sanctions.

In practice … The German government has so far approved arms sales to Saudi Arabia with a total value of almost half a billion euros and at the same time the Spanish parliament voted against the cancellation of arms sales to Saudi Arabia. Prime Minister of Canada considered “extremely difficult” the cancellation of arms sale contract to Saudi Arabia, the French president refused to answer about the possible suspension of arms sales to Saudi Arabia. In the US, president Trump and American military monopolies do not want to stop the 120 billion dollar order for weapon systems to the undemocratic and anachronistic regime of the Saudi Arabian Monarchy.
The words of the imperialists are of no value! Whatever they say, what really matters to them is the continuation of their profitability, especially if the business is as profitable as the sale of arms to kill the peoples!".
Refering to the Khashoggi case in an interview to soL international, the General Secretary of the Communist Party of Turkey (TKP) Kemal Okuyan also points out the hypocrisy surrounding the murder of the journalist. "It is necessary to think"-  says Okuyan- that no states that intervened in the Khashoggi case would tell the truth. There is a great struggle, and a very complicated bargaining. Putting aside the other aspects, we will never reach the truth from this struggle between Saudi Arabia, Turkey and the US. Only a bit of the available findings will be accessible for the public opinion, these will serve the "big diplomacy"." 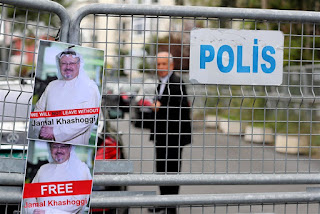 TKP leader regards the murder of Khashoggi as part of an international conflict and "one of the inevitable aftershocks of the Arab Spring", adding that the sudden interest of the imperialists is highly hypocritical.
"In the world of barbarians, they suddenly become the advocates of human rights or progressive people whenever they want. That is really disgusting. Look, the dead body of workers was found stuck in a manhole cover yesterday at Istanbul's third airport construction site. Nepalese cleaning workers found the body... It is still unknown what country the dead worker, more precisely, the killed one for profit, came from. That is an international airport! The burnt workers, the workers trapped under the demolished walls, the workers who died on truck dumpers... They are not columnists of the Washington Post. Nobody records their death" says Okuyan.
IN DEFENSE OF COMMUNISM ©