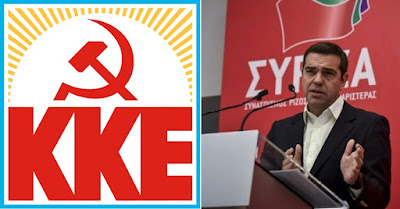 "The virtual reality that Mr Tsipras describes is collapsing in front of the people's daily routine, in poverty which persists, in the overdue payments which increase the threats of confiscations and auctions, in the labour jungle, in all these that were formed by the austerity memorandum laws of SYRIZA, New Democracy (ND) and PASOK alongside the permanent EU supervision. [This is a] proof that the development is not only unfair but, on the contrary, it is deeply class-based, anti-people and uncertain.


No matter how many fake dividing lines Mr Tsipras will fabricate, his policy, which on one hand supports an unjust development and on the other hand loyally serves the dangerous US-NATO plans, places him in the same reactionary bloc of forces alongside ND and PASOK. That why, after all, the alliances he chooses, in the face of the local elections, are related to persons and forces that belong to this bloc and have been distinguished in the implementation of the anti-people policy.

As concerning the struggle against the far-right, this cannot be done with the bow to NATO and the EU which support such forces, nor with friendships with far-right wingers such as Trump."