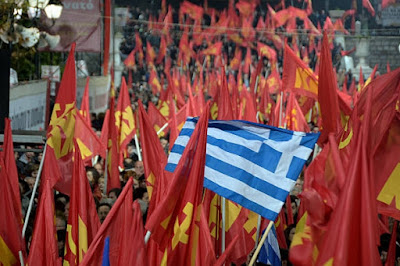 Demonstrations and various kinds of mobilizations organized by the Communist Party of Greece (KKE) and its youth wing KNE against the presence of US-NATO bases in Greece have been scheduled to take place in many cities across the country on 22nd and 23rd of October.

Major demonstrations will take place in Athens, Thessaloniki and Patras, as well as in other parts of Greece where the government, in collaboration with the US, is planning to install new military bases for the needs of NATO.


The call for mobilizations against US-NATO military installations was initiated by the Political Bureau of the KKE following the recent visit of Defense Minister Panos Kammenos in the United States.

In Athens, the protest will take place on Tuesday 23 October, at 6.30 pm, outside the Ministry of Defense and will be followed by a rally towards the US Embassy. The General Secretary of the CC of the KKE Dimitris Koutsoumbas is going to be the keynote speaker.

A similar demonstration has been scheduled to take place in the city of Thessaloniki, at 7 pm at Venizelos statue.

Other cities and towns where KKE and KNE organize protests and mobilizations include Patras, Alexandroupolis, Kalamata, Volos, Corfu, Rodos, Chania, Preveza and Chalkida.