Turkish workers establish solidarity network against the crisis and the capitalists 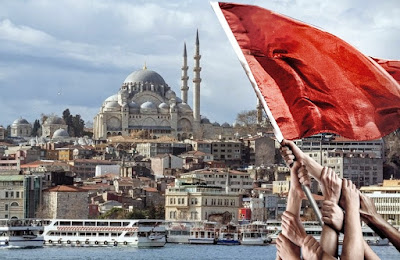 The Communist Party of Turkey (TKP) has inaugurated the solidarity, struggle and communication network of workers against the crisis and the capitalists, soL news portal reports.

In its appeal, “the TKP will welcome those who wish to have access to this network at its buildings, clubhouses and representative agencies,” the party said.

“We will join our forces. We will not bow down to the bosses. We will clamp down on the exploiters. Those who suppose that workers are all alone should know that we will breathe down bosses’ neck.”

A press conference held in Istanbul on October 13, where Alpaslan Savaş, a member of the CC of TKP, informed the press about the workings of the network during the press conference in which workers from various sectors expressed their ideas.

SOLIDARITY AGAINST CRISIS AND CAPITALISTS

Savaş noted in his speech that all the workers are under pressure due to the economic crisis that also has political dimensions, adding that hundreds of workers have lost their jobs since the burden of the crisis is being laid on their shoulders.

Despite the demagogy that the bosses and the workers are in the same boat, the bosses keep winning while the workers lose during the crisis, said Savaş.

Millions of people cannot meet their basic needs if they don't have a wage even for a single month and the workers fighting for life have to get organised, he added.

Savaş also added that the "anti-inflation program" announced by Berat Albayrak, the Minister of Treasury and Finance, was prepared in favour of the bosses, considering that millions of Turkish Liras would be transferred to the bosses through incentives.

Savaş noted that the profiteers of the economic crisis highly benefitted from the fluctuations of exchange rates during the release process of American pastor Andrew Brunson whose detainment in Turkey had led to a crisis between Ankara and Washington.

'THE WORKERS NEED TO HAVE THEIR OWN PLANS'

Saying the workers need to have their own plans just like the capitalists who act together during the crisis, Savaş noted that the network is mainly to disclose the violation of rights and committees will be formed at work places to fight against oppression. A group of lawyers will also be part of the solidarity network.

CARGILL WORKER: 'A LOT CAN HAPPEN IF WORKERS UNITE'

A worker named Abdullah from Cargill factory in Bursa talked about their experiences of struggle on its 180th day. He told that Cargill company was against the unionisation of the workers and they were fired under the pretext of economic crisis.

Detailing how the workers fired from the US-based sugar company Cargill commenced on a march from Bursa to the headquarters of the company in İstanbul in September, Abdullah noted that a lot can happen if the workers unite and that's why they will be part of the solidarity network.

TEXTILE WORKER: 'THE OFF BUTTONS OF THE MACHINES ARE IN YOUR HANDS'

Textile worker Fatma said that the textile sector is mainly composed of women, migrants and children who toil under extremely hard conditions.

Expressing that she will be supporting the solidarity network, Fatma added: "The off buttons of the machines are in your hands; you can turn them off and on whenever you want."

PLAZA WORKER: 'WE ARE AS WELL PART OF THE WORKING CLASS'

Noting that white-collar workers are as well part of the working class, Esin said that mobbing is a tool at the hand of the bosses in plazas and offices, leading various plaza workers to psychological depression.

Supporting the words of the textile workers, she said: "The power button of the computers are at our hands too, we can also turn them off."

She reminded that one of Turkey's biggest corporate groups Zorlu Holding already banned access to the website of the solidarity network in its offices and she read the solidarity message of Zorlu Holding workers at the press conference. The message said Zorlu Holding ranks first as in anti-labour policies, denying the most essential demands of the workers while recording a turnover of billions of Turkish Liras.

BANK WORKER: 'WE ARE NOT STRONG ALONE'

A bank worker, who had been fired from the call centre department of Odeabank, said that getting organised was necessary during the economic crisis. “We’re not strong when we are alone,” she said, adding that the bosses could abuse the unorganised workers. She said that “We will breath down bosses’ neck” would provide a planned work for solidarity and struggle against the bosses.

METAL WORKER: WORKERS FORCED TO PAY THE PRICE OF CRISIS

Indicating to the previous crises in 2001 and 2008-2009, metal worker Yılmaz said that the bosses were forcing the working class to pay the price of the crisis again, adding that they began to dismiss the workers. He said that it was not certain whether some workers could receive their dues since Ford would not produce trucks for three weeks in Turkey, and called on the workers to act in solidarity and contact.

HUNDREDS OF THOUSANDS OF TEACHERS ARE NOT EMPLOYED AS PAYROLL EDUCATORS

Cihan, a candidate teacher, said that hundreds of thousands of teachers were sharing the same fate in Turkey, adding that thousands of teachers were forced to work not as payroll employees but as paid labourers. Despite the need for payroll teachers in several branches around the country, the Turkish government does not prefer appointing them as payroll teachers, but employs them with short-term contracts for less wages and occupational rights.

Stating that he had to find a job in a different sector, he also said that school principals in Turkey were acting like bosses, and called on everyone to participate in this solidarity network.

JANITOR: ‘WE’RE NOT IN THE SAME BOAT’

“They say, ‘We’re in the same boat,’ we have a different boat, here is our boat,” Kayhan said, with reference to the government’s and capitalist organisations’ metaphor of “the same boat” during the crisis. He declared his support to the solidarity network, adding that the TKP assumed the responsibility for uniting the workers.

Halil, a worker who lost his job following their resistance in February while protesting the poor working conditions, also participated in the meeting. He said that the workers could triumph again since they had achieved previously.

Halil was working at the construction site of İstanbul’s third airport. Tens of thousands of construction workers are employed at the airport site, as hundreds of them rallied several times to protest the work-related deaths, poor working conditions and unhealthy food and dormitory services. Stating that his co-workers could not come to the meeting because of the airport consortium’s pressure, he shared the airport workers’ message to the meeting.

“From Turkey’s biggest and bloodiest construction site, we’re greeting the call for the rise of Turkey’s working class to intervene in the country’s politics and to settle accounts with the bosses,” the message read.

The airport workers said that their resistance served as a model, showing what the working class could achieve when they rose against the injustices, and how they frightened the bosses. “At the moment, our task is to organise more individuals from the working class that could rose up,” the message said.

Firdevs, a lawyer who is working at a law office, said that the crisis meant more exploitation of the workers from the viewpoint of the bosses while it meant bills and house rents that they could not afford, a struggle to survive for them.

She noted that they would struggle both for their rights and the legal rights of the workers within the solidarity network, calling on her colleagues to participate in the struggle against lawyer bosses.

A cafe-bar worker said that most of the workers in their sector were forced to work informally without any insurance. “We work 16 to 17 hours a day, we cannot use our break times,” she said. She added that cafe-bar workers could not seek for their legal rights since they were mostly employed informally.

Following the statements of the cafe-bar worker, construction worker Selahattin said that they were forced to work without any social security. He reminded a report of Anadolu Agency, a pro-government news agency, which had argued that work-related works were “natural” when a mine worker had died while working. He declared that they would not accept such impositions, adding that work-related deaths are intrinsic to this social order.

ANI TUR WORKER: 'WE ORGANISE THIS CALL FOR STRUGGLE'

Selda from Anı Tur tourism agency noted that they were fired on September 11, and gained victory within two weeks after their resistance started on September 17. Noting that they won by acting together, Selda said they support the solidarity network of TKP who was on their side during their resistance. Selda also expressed their gratitude to soL news that helped to spread their cause during the resistance.

Workers of Anı Tur, a tourism agency in İstanbul province of Turkey, who had been unlawfully dismissed from their work in groups during September, won their struggle on October 1
.
FLORMAR WORKER: 'WE ORGANISE AGAINST ALL CAPITALIST IN GEBZE, NOT JUST AGAINST FLORMAR'

Ayşe and Eren from the resisting Flormar workers noted that they organise against all capitalist in Gebze Organised Industrial Zone, not just against Flormar.

The workers of Flormar, a subsidiary of worldwide French cosmetics brand  Yves Rocher, had been fired for unionising on May 2018. Since that day, fired workers have been resisting in front of the Flormar factory in Kocaeli province Turkey.