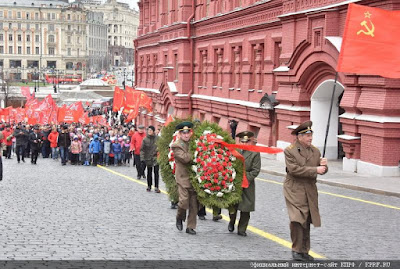 Communists and people of the working class gathered on Sunday in Moscow's Red Square to celebrate the 148th birth anniversary of the legendary bolshevik revolutionary and founder of the Soviet Union, Vladimir Iliych Lenin.
Those who turned out for the occasion held onto communist flags and portraits of the Soviet leader, as they convened on Red Square in order to visit Lenin’s Mausoleum.
The deputy of the Communist Party of Russian Federation (CPRF) Vladimir Kashin attended the ceremony, along with other members of the party and the Komsomol (youth wing), supporters and activists from various civil organizations.


Lenin’s embalmed body have been at the Mausoleum since Aug. 1, 1924, with the exception of 1,360 days during World War II when they were transferred to Tyumen, Siberia.

On the same day, despite the bad weather conditions, supporters of the ROT FRONT (Russian United Labour Front) in the city of Kirov gathered at the Treatre Square, in front of Lenin's statue, in order to pay their respect to the revolutionary leader.