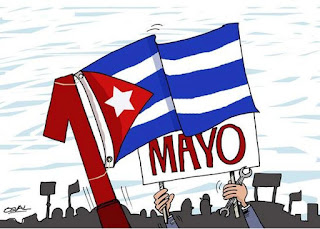 The Cuban Workers Federation (CTC) and national trade unions convoke our people to a massive mobilization to celebrate May Day, under the maxim of "Unity, Commitment, and Victory," at a very special time, as we undertake a fundamental process at the grassroots level leading to the 21st CTC Congress.
There are many reasons that motivate us to make the world proletariat's day a great demonstration of support for the Revolution, for Raúl, and the Party - in a new context of tribute to our historic leader Fidel Castro Ruz, in which we reaffirm our determination to fulfill the concept of Revolution he bequeathed to us.
Along with this, we have transcendental commemorations, expressions of the heroic traditions of struggle that make us proud to be Cuban and enrich the history of our homeland, such as the 165th anniversary of our national hero José Martí; the 150th of the initiation of our independence wars; the 65th of the assaults on Moncada and Carlos Manuel de Cespedes Garrisons; and the 60th of the triumph of the Revolution.


This May Day, from all of trade union structures, we will call on workers to turn the complexities of the economic panorama facing the country into "productive victories," concretizing productivity, conservation, and quality with efficient practices in every factory of our industrial base, in teaching, research and service activities, very conscious of responsibility of the working class to generate the wealth our people demand to meet their needs, and the only feasible way to raise the real income of workers.
In compact, lively parades, demonstrations, and events in plazas across the country, the demand will be repeated for an end to the criminal, genocidal, economic, commercial, and financial blockade imposed on Cuba for 56 years, and now being reinforced. We will demand the return of territory illegally occupied by the Guantánamo Naval Base, and denounce the arrogant, interventionist attitude of the current United States government.
Compatriots:
The day's celebration will be characterized by patriotism, joy, and the individual and collective recognition of vanguard experiences, as well as the contribution of workers to the process of updating the Cuban, economic, social model, which on the basis of a sovereign decision we continue building.
We will emphasize the examples and teachings of working class leaders like Lázaro Peña González, Jesús Menéndez Larrondo, José María Pérez, and Alfredo López, among others who identify different trade unions and represent the highest values of our workers.
We reaffirm the support of Cuba's working class to the sister peoples of Latin America and the Caribbean, impacted by the right wing offensive sustained by huge media campaigns meant to destabilize progressive governments, in particular that of the threatened Bolivarian Republic of Venezuela, intent upon defending its sovereignty and self- determination.
Through different social organizations, we will continue to participate in the battle for political, economic, social, and cultural integration of the Community of Latin American and Caribbean States (CELAC).
Once again we express our solidarity with trade union organizations which around the world struggle for the recognition of the legitimate rights of workers, facing the hegemonic power of their employers and the ever-present exploitation of capitalist regimes and their neoliberal policies.
Working men and women of Cuba:
This May Day, we will give another resounding demonstration of the indestructible unity of our heroic people; with our Party and Revolution we reiterate the commitment assumed by workers to the revolution's works, and will once again show the world our capacity for struggle and our firm conviction that we will always reach victory.
Long live International Workers' Day!
Long live Fidel and Raúl!
Onward to victory, always!