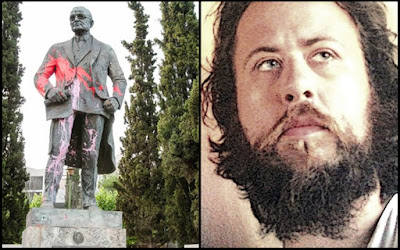 The recent events give us the opportunity to remember who Harry Truman really was. A representative of U.S. imperialism, Truman was the perpetrator of the most horrendous war crime of the previous century. We refer to the nuclear bombings of Hiroshima and Nagasaki in 1945.

“Having found the bomb we have used it... We shall continue to use it until we complete destroy Japan's power to make war. Only a Japanese surrender will stop us.... We thank God that it has come to us, instead to our enemies; and we pray that He may guide us to use it in His ways and for His purposes”. These creepy words were delivered on August 9, 1945 by U.S. President Truman during a radio address to the American people. Three days ago, the bomber Enola Gay had dropped the atomic bomb called “Little boy” in Hiroshima and another bomb was spreading death, destruction and chaos in Nagasaki.

Harry Truman was not only a mass murderer, but also a cynical liar. He had lied to his own people, as long as the reason behind the use of the atomic bomb wasn't to end WW2 or to lead to Japan's surrender. Another notable imperialist – a “butcher” like Truman- Winston Churchill had said: “It would be a mistake to suppose that the fate of Japan was settled by the atomic bomb. Her defeat was certain before the first bomb fell”.

Japan was completely isolated and had no other option but to surrender. The reason behind the use of the atomic bombs by the U.S. government was the intimidation of the Soviet Union. By throwing the bombs and spreading death and terror in Japan, the Truman administration was sending a threatening message to the working class movement across the world which had been strengthened through the antifascist struggle of the Second World War.

Numerous U.S. officials, as well as academics, have revealed Truman's blatant lies. For example, the U.S. Strategic Bombing Survey group, which had been assigned by President Truman himself, to study the air attacks in Japan, was writing in a report produced in July 1946: “Based on a detailed investigation of all the facts and supported by the testimony of the surviving Japanese leaders involved, it is the Survey's opinion that certainly prior to 31 December 1945 and in all probability prior to 1 November 1945, Japan would have surrendered even if the atomic bombs had not been dropped, even if Russia had not entered the war, and even if no invasion had been planned of contemplated”.

From his side, the then Suprepe Commander of all Allied Forces who later became President of the U.S., General Dwight Eisenhower, said: “The Japanese were ready to surrender and it wasn't necessary to hit them with that awful thing”. We could quote many testimonies from various U.S. Army officers (Admiral Leahy, General MacArthur, Assistant Secretary of War McLoy, etc.) that confirm all the above.

History has documented the tremendous effects of the nuclear holocaust in Hiroshima and Nagasaki. Truman and his administration are responsible for more than 200,000 deaths and hundreds of thousands post-attack casualties related to radiation.

“Hero” for the Greek bourgeoisie - “Butcher” for the people.

The war criminal Harry Truman, who spread destruction in Japan, is the same butcher who, three years later, ordered the bombing of the heroic guerrillas of the Democratic Army of Greece (DSE) in the mountains of Grammos. It was during the Greek Civil War when the U.S. intervened in order to help Greece's bourgeois class against the Democratic Army. On February 1948, the U.S. General James Van Fleet arrived in Athens and became the head commander of the bourgeois Greek Army.

In 1949, the mountains of Grammos in northern Greece became the field where the U.S. air force used for the first time the Napalm B bombs. Only in one battle in Grammos, the Americans dropped 338 Napalm bombs on DSE positions. Years later, the Napalm bombs were used by the American murderers in numerous imperialist wars: From Korea to Vietnam and from the 1991 Gulf War to NATO's bombing of Yugoslavia.

The bourgeois class of Greece had- and still has- every reason to honor the mass murderer called “Harry Truman”. In 1963, without notifying the City Council, the Greek government ordered the installation of Truman's statue (a “gift” by the anticommunist Greek American organisation AHEPA) in central Athens.

The statue of Harry Truman in the heart of the Greek capital consists a repulsive symbol-fossil of U.S. imperialism's atrocities. It is a monument that reminds us the murderous imperialist interventions and wars committed by the killers of the people, as well as our debt for continuous struggle against the barbarity of the capitalist exploitative system and the modern “Trumans” who serve it.