Dimitris Koutsoumbas: "Greece's people have nothing to divide with Turkish people" 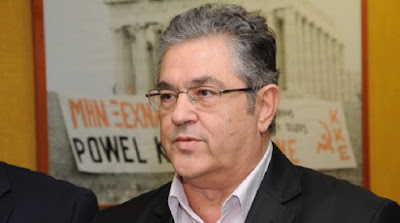 In a statement from Brussels, where he participated in the European Communist Meeting, the KKE General Secretary said:

"We are especially concerned and express our opposition to the dangerous developments in Syria, eastern Mediterranean, with the intensification of the competitions and the gathering, over there, of many warships, aircrafts, which results in the sharpening of the conflicts and the danger of a generalized imperialist war in the broader region of Europe, eastern Mediterranean and Middle East. The intensification of the Turkish aggressiveness and provocativeness in the Aegean and the Cypriot EEZ is expressed within this context."

Calling the Greek people to fight for the country's disengagement from the all imperialist alliances, Dimitris Koutsoumbas underlined that the people of the region have nothing to divide between them. "Towards this direction", he said "the struggle for friendship, solidarity, cooperation, peace and prosperity must be strengthened, for the abolition of the system which leads only to poverty, wars and exploitation of man by man".