In a press release issued on Friday, the All-Workers Militant Front (PAME) expresses its support and solidarity with the Palestinian people and the events it organizes for the Day of the Palestinian Land.
"We denounce the continuing murders of Palestinian protesters in Gaza by the murderer-state of Israel.
Israel's escalating aggression against the Palestinian mobilizations, resulting in a large number of deaths, is based on the provocative support it enjoys from US-NATO-EU, as well as governments like the SYRIZA-ANEL Government of Greece.
The class trade union movement of Greece stands by the side of the Palestinian people and its mobilisations for the creation of an Independent Palestinian state on the borders of '67 with its capital East Jerusalem".
* * *
At least 16 Palestinians have been killed, and hundreds more have been reported injured in protests along the Gaza border on Friday.
According to medical officials, one of the dead, a Gaza farmer, was killed by an Israeli tank shell in the southern Gaza Strip. At least six more have been killed by Israeli troops. An Israeli military spokesman said in southern Gaza: "Two suspects approached the security fence and began operating suspiciously and the tank fired towards them."
The Israeli military is referring to the protests as "violent riots" to justify the crackdown, but Palestinian leaders say the demonstration was peaceful. 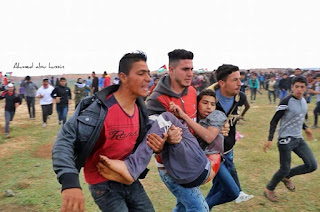 A subsequent statement said troops had used dispersal means against protesters who were rolling burning tires and hurling stones at the security fence and forces, and that soldiers had fired towards the main instigators.
The head of Hamas politburo, Ismail Haniyeh, said the protest "demonstrates that there are no alternatives to Palestine and the right of return," according to Maan.
"We will not give up and we will not bargain with the Zionist entity over even a small piece of Palestinian land," Haniyeh said.
"Our people went out today to make it clear that we will not give up Jerusalem and that there is no alternative to Palestine and the right of return. We will not accept the right of return staying only a slogan."
Tens of thousands of Palestinians gathered at five locations along the fenced 65km frontier, where tents were erected for a planned six-week protest, local officials said. The Israeli military estimate was 30,000.