Fransen was convicted of three counts of religiously aggravated harassment. Golding was found guilty of one charge. Fransen was handed a 36-week sentence and Golding 18 weeks.


During their trial in January, the court heard they had targeted homes and people in Kent whom they believed were connected to a rape trial at Canterbury Crown Court where three Muslim men and a teenager were convicted of rape and jailed. The pair, both from Penge in south-east London, were ar- rested in May last year.

They denied a total of seven counts of harassment. Judge Justin Barron threw out three of the charges, whilst Fransen was found guilty of three and Golding of one. He told the court the pair were “well-known”, “controversial” and “generate their own publicity”, but his verdict was based “solely on admissible evidence heard in court”. He said their words and actions “demonstrated hostility” towards Muslims and the Muslim faith. “I have no doubt it was their joint intention to use the facts of the case [in Canterbury] for their own political ends. It was a campaign to draw attention to the race, religion and immigrant background of the defendants.”

Both Fransen and Golding were convicted on a joint charge of religiously aggravated har- assment after an incident last May at 555 Pizza take-away in Ramsgate, when Fransen banged on the windows and doors of the shop and screamed “paedophile” and “foreigner”. In each case, they instead targeted innocent members of the public. They filmed the abuse and then released it on social media and through the Britain First website. They also posted offensive leaflets through the letterboxes of houses in the area where the defendants lived. Fransen was convicted of abuse after visiting a house she wrongly believed to be the cur- rent address of Sershah Muslim- yar, a defendant in the trial. She was also convicted of visiting the Kent home of another defendant, Tamin Rahmani, and shouting racist abuse through the front door whilst his pregnant partner Kelli Best was there. 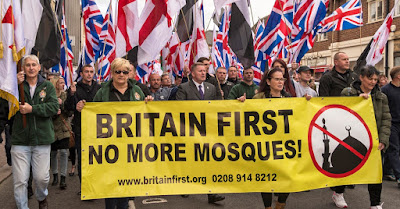 During sentencing Fransen spoke over the judge, saying: “This is a very sad day for British justice. Everything I did was for the children of this country and they are worth it.” As Britain First supporters left the courtroom they hurled abuse at court staff and mem- bers of the press, shouting “no surrender”. Meanwhile Police are investigating after the hate-filled leaflet called on supporters to carry out violent attacks on Muslims The letters incite violence against Muslims and have been reported to police. They call for Muslims to be “butchered” in a day of hate and have sparked a police probe after they were post- ed through doors across Britain.

The disgusting propaganda advertises “Punish a Muslim Day” next month, encouraging torture, acid attacks, arson of mosques and assault. The Metropolitan Police are amongst the forces investigating the leaflets, which have been re- ported in London, the Midlands and West Yorkshire.

Activist group Tell MAMA, which was set up to tackle an- ti-Muslim hatred, said the threats were being treated with “the utmost seriousness”.

In a statement, the organisa- tion said: “It is essential that all letters and envelopes are kept and handled minimally to pre- serve evidence for the police to investigate. “Incidents like this are rare but we urge vigilance and calm as we remind Muslim communi- ties that our confidential support service is available to assist in this matter."