This is Capitalism No #2


The numbers are revealing. According to Bloomberg Billionares Index, the richest people on earth became $1 trillion richer in 2017, more than four times last year’s gain.

Amazon.com Inc. founder Jeff Bezos added the most in 2017, a $34.2 billion gain that knocked Microsoft Corp. co-founder Bill Gates out of his spot as the world’s richest person in October. Gates, 62, had held the spot since May 2013, and has been donating much of his fortune to charity, including a $4.6 billion pledge he made to the Bill & Melinda Gates Foundation in August. Bezos, whose net worth topped $100 billion at the end of November, currently has a net worth of $99.6 billion compared with $91.3 billion for Gates.

The U.S. has the largest presence on the index, with 159 billionaires who added $315 billion, an 18 percent gain that gives them a collective net worth of $2 trillion. Facebook Inc. co-founder Mark Zuckerberg had the fourth-largest U.S. dollar increase on the index, adding $22.6 billion, or 45 percent, and filed plans to sell 18 percent of his stake in the social media giant as part of his plan to give away the majority of his $72.6 billion fortune. 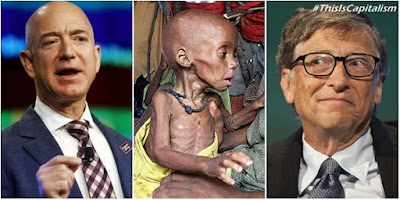 1 billion children worldwide are living in poverty. According to UNICEF, 22,000 children die each day due to poverty.

805 million people worldwide do not have enough food to eat.

Preventable diseases like diarrhea and pneumonia take the lives of 2 million children a year who are too poor to afford proper treatment.