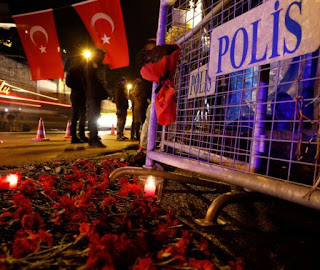 On the occasion of the recent deadly attack in Istanbul, the World Federation of Trade Unions (WFTU) issued the following statement of solidarity to the working class of Turkey:
Dear Colleagues,
On behalf of the WFTU which represents 92 million members in 126 countries of the world, we convey our condolences to the families of the victims in Reina Club in Istanbul.
We express our internationalist solidarity and our support to the militant trade union movement in Turkey and to the Turkish workers. The murder of the 39 people reveals the responsibility of the principals that are killing civilians, innocent and ordinary people. For this situation in Turkey and in Middle East abettors also exist; these are the governments which take advantage of the fundamentalism in order to put in action their plans and their anti-labor policies.
The imperialistic forces that created, financed and armed ISIS and its branches have huge responsibility. The greatest moral responsibilities belong to the governments of USA, European Union and the monarchies of the Gulf. It is provocation and hypocrisy that the same day that 39 innocent people lost their lives, the President of France, François Hollande, who has the major responsibility declares that him and his Government will save the Arab people.


The Governments of France, Germany,  Britain and the other imperialistic countries which are competing for the spheres of influence, in order to steal the petroleum and construct the energy pipelines are these who take advantage of the fundamentalism.
The WFTU, which represents the militant and internationalist trade union movement, calls all the workers regardless their religious, ideological and linguistic differences to struggle united against the monopolies and the imperialists for a world without the capitalistic barbarity and antagonisms. A world that the peoples can live in brotherhood.
* * *
PAME (All-Workers Militant Front) Condemns the Escalation of Authoritarianism and intimidation tactics Against Trade Union organizations in Turkey.
3 January 2017.
Last example of the intimidation and antiworkers’ tactics of the Turkish Government against the workers was the prohibition of Nakliyat Is Union protest to demand better minimum wage. The attempt of the of the Union to realize its protest, in spite of the prohibition, met the numerous police, riot police forces cars and vehicles, which surrounded the union’s offices.
The multinationals and the capitalists of Turkey make huge profits from the work of the Turkish workers. The business groups use the developments so as to impose their will and raise their profits, by prohibiting all workers demands and struggles.
PAME expresses its solidarity with the Nakliyat Is Union, the workers and the trade unions of Turkey that continue to fight against very difficult conditions.
We condemn the antiworkers’ practices and intimidations of the Turkish Government and the Business Groups, against the workers and the people of Turkey.