KKE: Greek and Turkish workers must fight together against the bourgeois classes 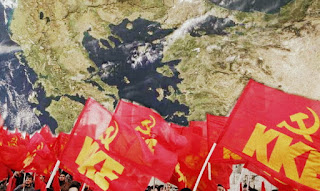 The Press Office of the CC of the Communist Party of Greece (KKE) issued a statement regarding yesterday's violation of the Greek maritime borders by Turkish warships. More specifically, the statement says:

"The KKE denounces the violation of  the Greek maritime borders, in the area of Imia, by Turkish warships in the presence of the heads of the Turkish armed forces, which took place on Sunday 29th of January.

This action- 21 years after the Imia crisis- consists a dangerous development added to the successive violations of the Greek air and maritime space, the challenging of the Treaty of Lausanne which defines the Greek-Turkish borders, the threats which Ankara fired recently, after the decision of the Supreme Court for the non-extradition of the 8 Turkish military officers who asked for protection-asylum in our country.

The governmental efforts to pass a climate of complacency do not correspond to the seriousness of the situation that the Turkish aspirations form about grey zones in the Aegean, the competition between the bourgeois classes of Turkey and Greece for the geostrategic upgrading in the region, in combination with the sharpening of the inter-imperialist competitions in the Middle East, North Africa, in Eastern Mediterranean.

In practice, it turns out that the positions which present EU and NATO as guarantors or talk about "European" and "NATO's" borders in the Aegean, are dangerous and have no relation whatsoever with the defense of our country's sovereign rights. NATO's presence in the Aegean not only it does not prevent, but emboldens Turkish aggressiveness.

The developments require the substantial awareness and preparedness of the people, strengthening of the struggle for our country's disengagement from the imperialist plans, strengthening of the common struggle of Greek and Turkish working people against the bourgeois classes and the policy which serves their interests".