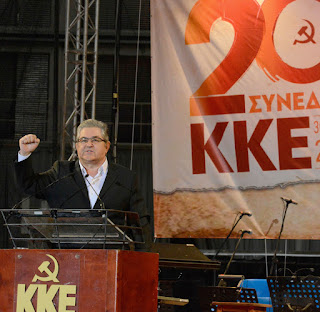 THESSALONIKI- With a large political and cultural event in the country's second largest city, Thessaloniki, the Communist Party of Greece (KKE) honored its 99 years, just a few months before the Party's 20th Congress. The event, organised by the KKE Central Macedonia Party Organisation at Palais des Sports indoor arena, was attended by General Secretary Dimitris Koutsoumbas who delivered a speech.

Secretary D.Koutsoumbas called the working class and the popular strata to join the KKE in a large social alliance against the capitalist system and its political representatives.

Among other things, Koutsoumbas said: "Today, all those who feel that belong to the Left, who voted for SYRIZA in the previous elections, can find their actual position here, within the lines of the labor-people's movement which has as an aim and direction the struggle against the monopolies, against capitalism, against imperialist war, in alignment with the KKE".

The cultural part of the event included a concert with songs by the renowned composer Yannis Markopoulos, performed by popular singers including Lakis Halkias, Miltos Paschalidis and Kostas Makedonas.