KKE GS Koutsoumbas: "The 21st century will bring the definite overthrow of Capitalism"

"The 21st century will bring the definite and- this time- irreversible overthrow of capitalism and the construction of socialism-communism. After all, the ice has been broken, the road is open, the way has been shown" said Dimitris Koutsoumbas, General Secretary of the Communist Party of Greece (KKE), during the closure of his speech at the European Communist Meeting which took place today in Brussels.


Refering to the 100 years since the 1917 Great Socialist October Revolution, the KKE General Secretary said among other things: "October proved the capacity and capability of the working class to realize its historic mission as the only really revolutionary class, to lead the cosmogony of building socialism-communism. On the same time, October demonstrates the irreplaceable role of the guidance factor of the socialist revolution, the Communist Party, the immense power of proletarian internationalism".

The opening speech of the European Communist Meeting, which is attended by representatives of 45 communist and workers parties from 34 countries, was delivered by the KKE MEP and member of the KKE's Central Committee Kostas Papadakis. 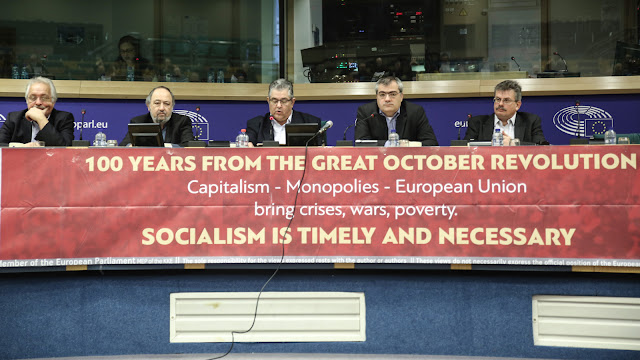 The major subject of the European Communist Meeting is "100 years since the Great October Socialist Revolution. Capitalism- monopolies - European Union bring only crises, wars, poverty. Socialism is timely and necessary".

This year we honour the 100th anniversary of the Great October Socialist Revolution of 1917 in Russia that left its mark on every corner of the planet for many decades.
October demonstrated the working class's potential and capacity to implement its historical mission as the only truly revolutionary class, to lead the first attempt to construct socialism-communism.
At the same time, October shows the irreplaceable role of the guiding force of the socialist revolution, the communist party, the enormous strength of proletarian internationalism.
Today, despite the developments since then, we are even more certain and categorical about the timeliness and necessity of socialism-communism.The counterrevolutionary overthrows do not change the character of the era. The 21st century will be the century of a new upsurge of the global revolutionary movement and a new series of socialist revolutions.The daily struggles for partial and more general gains are undeniably necessary, but they cannot provide substantial, long-term and permanent solutions. Socialism remains the only way out.
The necessity of socialism is highlighted by the sharpening of the contradictions in the contemporary capitalist world, the international imperialist system. The material preconditions for socialism, i.e. labour power and the means of production, have matured within capitalism itself.Capitalism has socialized labour and production to unprecedented levels. The working class, the main productive force, constitutes the majority of the economically active population. However, the means of production, the products of social labour are privately owned by the capitalists.This contradiction is the root cause of all the crisis phenomena of contemporary capitalist societies, such as economic crises, the destruction of the environment, the drug problem, the long working day despite the great increase of labour productivity, and which of course coexists with unemployment, under-employment, the intensification of exploitation etc.At the same time, however, this reality signals the need to abolish private ownership of the concentrated means of production, to socialize them and use them in a planned way in social production, the planning of the economy by workers' power, with the goal of people’s prosperity.

The theoretical legacy of October, enriched with the experience of the socialist revolutions that followed, is valuable.
It confirmed in practice the correctness of the Marxist-Leninist theory of the revolution, which flows from the complete systematic analysis of imperialism i.e. that the revolution matures over the course of historical developments and breaks out in a period determined by a combination of objective and subjective causes.
The bourgeois and all kinds of renegades distort or conceal the importance of the October Revolution because they obviously understand full well that through its victory the theory and ideas of Marxism became a material force that mobilized and continue to mobilize millions of workers all over the world against capital's power, who were victorious and organized their own state, the dictatorship of the proletariat, which is founded on the direct producers, the working majority, and is the highest form of democracy that humanity has ever seen.
The nihilistic stance towards the socialism we knew, the adoption of views that say it was a total failure-because its course was interrupted-is an unscientific stance and an ahistorical one and leads to impasses.
Socialism was constructed, developed, and began to solve the major economic and social problems. It was not possible for a number of reasons for it to highlight and most of all liberate, over the entire course of its construction, the inherent potential for the constant development and perfecting of production, to consolidate itself in its struggle against the capitalist system.
However, this does not negate the contribution and role of the socialist system, as it was formed in the 20th century, irrespective of deficiencies, weaknesses and mistakes that appeared during this difficult course.
The October Revolution in practice confirmed the Leninist analysis concerning the weakest link in the imperialist chain. Up until that point what was missing in the international movement was the theoretical foundation for the possibility of the socialist revolution being victorious in one country or a group of countries, which would emerge as weak links, as a result of the sharpening of the internal contradictions under the influence of international developments. Our party will hold its 20th Congress at the end of March, with as its basic subject the comprehensive ideological-political-organizational strengthening of the party and its youth as a party of revolution. This steeling of the party is a necessary precondition so that we can successfully implement the complex tasks for the regrouping of the labour movement and developing the social alliance in an anticapitalist-anti-monopoly direction, in the struggle against imperialist war, with workers' power as its goal.

This steeling of the party also determines its ability to prepare the people for these tasks in a direction of rupture with and overthrow of the capitalist system. This is even more valid in conditions where everything seems immobile or is moving at a slow rate towards the goal of the workers’-people’s counterattack or even in a period when there are setbacks.
Our party has come to the conclusion that the fact that the revolutionary content and gains which came as a result of the October Revolution were weakened due to the impact of trying to solve existent problems of socialist construction in a mistaken direction, by following capitalist recipes, as we often say, a course that chronologically coincided with the decisions of the 20th Congress of the CPSU in 1956, which were expressed in their extreme form through Perestroika in 1985 and the counterrevolution as a whole in 1991.

However all this does not change or alter the internal dynamism of socialist construction or even more so the decisive importance of the Great October Revolution of 1917.
The developments in the International Communist Movement, the split in the ICM, issues to do with its strategy also played a serious role in the formation of the global correlation of forces.
Our party has learned from its weaknesses and mistakes during the past, such as the lack of theoretical and political readiness to understand the development of the counterrevolution in the USSR in a timely fashion.
We consider that it is the responsibility and right of every CP to study the theoretical issues of socialism, to evaluate the course of socialist construction, to draw conclusions for the battle against opportunism at an international level, to prepare the party and class forces in general in order to explain the class struggle at an international level, to provide a scientific class explanation of the setbacks to social progress and development. In this internationalist and communist spirit, we try to follow the developments today in countries like China, Vietnam, Cuba and other countries.
The scientific explanation and defense of socialism's contribution in the 20th century is an element that strengthens the revolutionary strategy of the communist movement.
The study of the contradictions, of the subjective mistakes of the historical progress as a whole is a process that develops the theory of socialism-communism, which will revive the communist movement ideologically and politically and will provide it with overwhelming strength in its new offensive and final victory.
Amongst our most important tasks today is to restore the workers' knowledge about the truth of socialism in the 20th century, without idealizations, objectively and free of the slanders of the bourgeoisie, which are based on the catastrophes brought about by the counterrevolution.
Capitalism may still be strong today, but it is not invincible. The capitalist crisis has demonstrated more intensely the historic boundaries of the capitalist system. The imperialist unions, such as the EU and NATO, which are established on the terrain of capitalism and for the defense of the monopoly interests, are not free of inter-imperialist antagonisms, both inside them and with other imperialist powers.
Especially in the current phase, during which we must be more concerned about their contradictions, with the emergence of populist, far-right, eurosceptic forces in a reactionary direction in all the countries of Europe, as well as with the election of Trump in the USA. Of course, it remains to be seen how US policy will be expressed after the official inauguration of the Presidency, because the election struggle has other elements, populism. Of course, the USA will continue its imperialist political line, as it is the number 1 economic and military power in the world. However, they are worried about China’s elevation into the 2nd position in the international economy and of course they worry about the balance of trade that is negative for the USA and positive for China. Particularly when China is the number 1 creditor country of the USA, which owes China over 1.5 trillion dollars. So the USA sees China as its number 1 enemy today, which has good relations with Russia which is the second strongest military power in the world.
Comrades,
It is our duty as a communist movement to follow all these developments closely, to exchange views, information, to determine a joint stance and activities in relation to the entire international situation and the developments that threaten our peoples.
In a way that will help today’s generation and the future generations, the new shift of the working class that enters production and the movement to say:
The 20th century began with the greatest offensive launched by the proletariat in any era and ended with its temporary defeat. The 21st century will bring the final and this time irreversible overthrow of capitalism and the construction of socialism-communism.
So in any case, the ice has been broken; the road is open, the way has been shown.
Long live the 100th anniversary of the Great October Revolution!