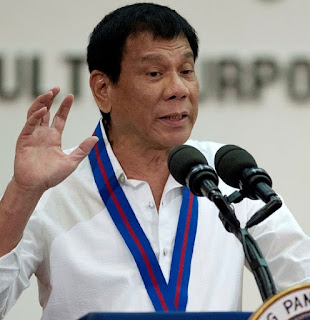 By Ronalyn V. Olea / Source: Bulatlat.com
MANILA – President Rodrigo Duterte’s tirades against the so-called oligarchs are turning out to be mere rhetoric as he pursues the same economic policies that favor the rich.
In a forum, Jan. 13, Rosario Bella Guzman, Ibon executive editor, noted that Duterte’s ten-point socioeconomic agenda and the upcoming Philippine Development Plan (PDP) 2017-2022 both aim to increase the profits of foreign corporations and local oligarchs at the expense of the welfare of the people and long-term economic development.
Guzman said the PDP is silent on free land redistribution. She noted that the economic managers of the Duterte administration blocked Agrarian Reform Secretary Rafael Mariano’s proposal for a two-year moratorium on land-use conversion.
The PDP, added Guzman, does not have plans to implement substantial wage increases or even a universal pension scheme. Guzman said Duterte’s promise to end contractualization has not been fulfilled with the Department of Labor and Employment affirming legal arrangements for contractualization.
Taxing the poor, unburdening the rich
Guzman described the tax reform package of the Duterte administration as more regressive – the poor pays more than the rich. The Department of Finance is proposing to lift Value Added Tax (VAT) exemptions on 30 products and services, and 13 types of transactions. The DOF also wants to impose an excise tax on petroleum products. Fuel items such as diesel used by buses and jeepneys, cooking gas, and bunker fuel used to generate electricity will have a tax of P6 (US$0.12) per liter. Meanwhile, tax on gasoline will rise from P4.35 to P10 per liter ($0.09 to $0.2). This is on top of the 12-percent VAT imposed on these products.


Finance Undersecretary Karl Kendrick Chua defended the tax adjustment proposals. In a report, Chua said the proposal would shield poor and low-income consumers from the effects of tax adjustment proposals “because the new government is committed to providing highly targeted direct transfer programs and indirect subsidies to them.”
Ibon estimates that these tax reforms would make minimum wage earners pay P2,500 ($50) more per year and the poor paying P1,200 ($24) more per year.
On the other hand, corporate income tax would be reduced from 30 percent to 25 percent while estate tax would be lowered from 20 percent to six percent of the value of property. Those earning P6 million ($120,438) per year will be paying P232,500 ($4,667) less in taxes. The tax on interest income earned on peso deposits and investments will go down from 20 percent to 10 percent.
Hybrid PPP
These tax measures, according to Ibon, aim to raise funds for “government efforts to implement the neoliberal economic agenda of generating profits for foreign and domestic corporate elites.”
Socioeconomic Planning Secretary and National Economic and Development Authority (Neda) Director General Ernesto M. Pernia revealed last year 10 infrastructure and development projects worth P320 billion ($6.42 million).
“Guided by the zero to 10-point agenda of the President, we are carrying on with the macroeconomic policies of the previous administration, but ramping up infrastructure spending, promoting regional and rural development, and investing heavily in human- capital development, which includes health and education and nutrition,” Pernia said.
The Duterte administration is planning to spend P8 trillion ($160 million) for transportation infrastructure projects alone in the next five years. Ibon noted that there is a “disproportionate emphasis on the National Capital Region and surrounding provinces, on a few urban centers such as Cebu and Davao and in natural resource-rich Mindanao.”
“…in the context of the economic agenda’s overall neoliberal thrust, the infrastructure boom is mainly about building the domestic transport and related infrastructure for the country to better perform its role as a site in the global value chain of foreign capital,” Guzman said.
To accelerate foreign investments on infrastructure development, Pernia said, the Neda has recently launched an online database system and streamlined the project-approval process.
Ibon noted that the government is now more open to unsolicited proposals, which are prone to being less transparent than solicited bids.
Guzman said the government is considering what it calls ‘hybrid PPPs,’ where government uses official development aid (ODA) financing to build facilities, using private contractors but then bids out subsequent operations and management. This means taxpayers will to pay ODA-financed projects for profit-seeking corporations. 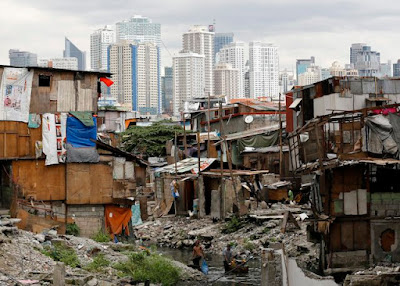 What independent foreign policy?
Duterte’s posturing about having an independent foreign policy seems to be meaningless.
Guzman said like the previous administration, Duterte continues to negotiate with other countries for free-trade agreements (FTAs) such as the China-led Regional Comprehensive Economic Partnership (RCEP), US-led Transpacific Partnership (TPP) and EU-PH FTA.
“While they argue that these FTAs are important, they expose the country to unfair competition. They strengthen foreign investors’ rights at the expense of the local economy,” Guzman said.
No change yet in sight
Overall, Duterte is but continuing the neoliberal economic policies that have stunted the country’s economic growth in the last three and a half decades.
Jose Enrique Africa, Ibon executive director, described neoliberal economics as pro-foreign investor, pro-business, pro-free trade, anti-income, un-taxing the rich and taxing the poor, and preserving private property and wealth.
Guzman said the realignment of funds such as the P8.3 billion budget to cover tuition of state universities and colleges is populist but not sustainable.
“The first six months showed a tendency already that the Duterte administration is a populist administration pushing for neoliberal policies under a smokescreen of war on drugs, national rhetoric and leftist façade,” Africa said