Statement of Solidarity to the upcoming 48hour General Strike in Greece 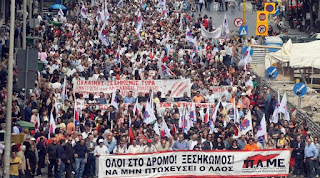 The last years the Greek People suffers a brutal attack against its rights, in order to preserve the profitability of the multinationals, the big capital. For years there have been wage cuts, layoffs, abolishment of social security and insurance rights, pension cuts, privatization of Healthcare, Education, etc. Poverty and Misery for the workers, unemployment and flexible working relations for the young, while the multinationals and big corporations make huge profits. The new measures directed by the 3rd Memorandum, signed by the Greek Government of SYRIZA the summer of 2015, Healthcare becomes an unaffordable commodity for the young workers and the pensions suffer new big cuts. New taxes are imposed to the people, while big businesses are given new tax exemptions. At the same time are being promoted changes on the functioning of the trade unions, so as to block the militant response of the workers, to make the unions puppets of the bosses.
Against these measures, PAME has called the working class to give Militant Response with a 48hour General Strike.
The continuous struggles of the Greek Workers have already succeeded in delaying the antiworkers’ measures, which were planned to be imposed on December of 2015. But, now comes the time of a big struggle, not only for the Greek Workers, but for all workers who resist exploitation and injustice.
The Trade Union organizations who sign this resolution we express our support to this great fight of the Greek Strikers. Against the Antiworkers’ attack, the working class responds with Solidarity and Internationalism. On the 48hour General Strike in Greece, we will be on your side.
The Trade Unions
Italy-USB
Turkey-Naklyat-Is
Sweden-SEKO Klubb 111.