May 1936: A milestone in the history of the Greek working movement. The country was in the midst of unprecedented moments of militant upheaval. Large-scale strikes, began on April, gradually took the characteristics of peoples' revolt which had to face the barbarity of the fascist Metaxas government.

The center of the demonstrations was Thessaloniki where, since March, strikes in various sectors had been erupted due to the miserable conditions of labor. On April 29, the tobacco workers declared an indefinite strike demanding, among other things, better wages. Their mobilizations created a wave of solidarity and revolt across Greece. Until the Workers' Day of 1936, the strikes had been spread in other cities, from Serres to Volos and from Karditsa to Athens. By May 7th, the strike had already spread in all over the country, with the participation of thousands of workers. The government of Premier Metaxas- a government of violence and terrorism- had one major aim: the dissolution of the strikes with any means.


On May 8th, equestrian policemen attacked a workers' demonstration, opening fire against the masses. For the next day (May 9th), the General Confederation of Greek Workers declares a 24-hour strike. The government, in an attempt to break the strike, conscripted men from various sectors (railways, electricians etc) but without result: the workers ignored the government's terrorist efforts and create an unprecedent, huge strike-rally in Thessaloniki. The rally was converting into a mass uprising against the fascist political establishment, while the government had already transformed the city into a military camp with hundreds soldiers and policemen in almost every corner and building.

The clash was unavoidable. The fascist government unleashed an armed murderous attack against the workers' rally. The first dead worker was Tasos Tousis, in the crossroad of Syggrou and Ptolemeon streets, in front of “Metropolis” hotel. His comrades placed his lifeless body on a door they had ripped from a nearby building. His mother found him on that point- the shocking photo of her son's mourning was published the other day on “Rizospastis”. This tragic photo would later become the inspiration for communist poet Yannis Ritsos to write his epic and best known poem “Epitafios”.


However, the deadly attacks by the army and police couldn't stop the demonstration, while a huge number of people- even soldiers who denied to shoot- joined the workers. The slogan “down with fascism” spreads in the city. The working class mourned 9 deaths (12 according to other sources) while hundreds were the wounded workers. 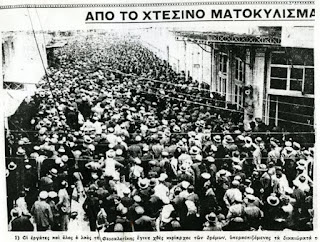 On the next day, the funerals of the workers, attended by more than 200,000 people, turned into new mass demonstrations against the bloodthirsty Metaxas government. What followed was an orgy of violence and arrests from the side of the government while armed forces, disembarked at Thessaloniki's port, tried to enforce law and order in the city. On May 13th another nationwide strike took place condemning the murderous attack of the state authorities. Under the public pressure and an outburst of complaints by labor unions and opposition parties, the Metaxas government hypocritically declared that the workers' demands would be pleased- something that never happened. The Greek bourgeoisie (powerful industrialists like Bodosakis, Hadjikyriakos, Kanellopoulos etc), the Royal family and their imperialist collaborators had different plans.

What followed is known as “Metaxas Regime”. On August 4th 1936, the state authority of the fascist Prime Minister carried out a Coup, dissolving the bourgeois parliament and establishing an authoritarian dictatorship which ruled Greece until 1941. Thousands of communists (among them the General Secretary of KKE Nikos Zachariadis) were persecuted and imprisoned.

From bourgeois parliamentary democracy to the 4th of August.

“Metaxas is the most sophisticated fascist with a clearly hitlerite, fascist program”
Rizospastis, 6 March 1936.

May 1936 was a brilliant militant moment in the history of the Greek workers movement which the then fascist government “drowned in blood”. It could possibly mark the beginning of the end of Metaxas' authority, if the bourgeois parties had responded positively to KKE's call for a united struggle against the ambitious dictator. The CC of the Communist Party of Greece was pointing out in a statement: “Metaxas the murderer, the representative of the most terrorizing, plutocratic circles, of the King and fascist militarism, accelerates his effort in order to establish a monarcho-fascist dictatorship in Greece” (“KKE-Official Documents”, Vol.4).

The Communist Party had multiple times pointed the danger of the rise of a possible monarcho-fascist dictatorial regime. On March 28, 1936, a few weeks after the murder of medicine student A.Sotiriadis by the Police, a KKE manifesto was stressing out: “Working People! In front of your eyes, under the auspices of the Monarchy, the most anti-people, dishonest, criminal conspiracy is being unveiling. The leader of this conspiracy is Metaxas. His collaborators and accomplices are all the plutocratic parties, from the anti-Venizelos ones which bidding in anti-people governmental measures and plans to the pro-Venizelos parties which support the government and it's antipeople policy” (Makis Mailis, “From the 4th of August until today”). On the same time, despite the press reports which were exposing the danger of a dictatorship, the centrist leader of the Liberals Party Themistoklis Sofoulis was stating: “Mr.Prime Minister (Metaxas) does not consider such a thing. On that issue, I am convinced that the people must remain calm and shall not believe such intentional rumors”.


The bourgeois political powers turned their backs to KKE and Metaxas- who came to power with their support- showed his real face. A face which was- as Brecht wrote- “the most naked, braze, oppressive and deceitful Capitalism”; the face of Fascism. The Metaxas regime, which today is celebrated by the criminal, Neo-nazi party of Golden Dawn, was born from the womb of bourgeois power, of the exploitative system, of the dictatorship of the Capital.