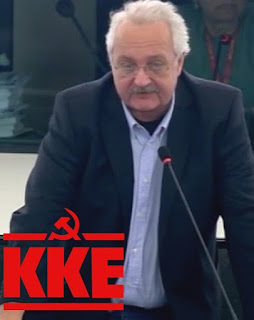 On the anniversary of the Peoples' Great Antifascist Victory of May 9th, the European Parliament organised unhistorical "celebrations" about the "Day of the European Union" accompanied with a lot of anticommunism. That happened within the frame of EU's provocative effort to re-write History, to erase from people's memory, especially of the youth, the great achievements of the working class in Socialism, the irreplaceable achievements of the first socialist state in the world, of the Soviet Union and it's people, of the millions of communists who decisively contributed to the defeat of nazism and fascism.

The German social-democrat president of the European Parliament, Martin Schulz, managed, through using anticommunist slogans about "communist dictatorship", to show what bourgeoise and the politicians who serve her, fear most...

A response to the distortion of the historical truth and anticommunism of the EU was issued by KKE's MEPs. Addressing the plenary session of the Europarliament, KKE MEP Sotiris Zarianopoulos said the following:


"Years ago you (the EU Parliament), decided to rename today's anniversary of May 9th, from day of the Great Antifascist Victory of the People to "Day of Europe", meaning the EU, this offspring of the monopolies.

You re-write History, (by) equating fascism and communism, scaling anticommunism and supporting the persecutions of communists in many countries. By staging fiestas and "Houses of European History's distortion". Objectively, you cultivate the land for fascism's revival which the capitalist decay and barbarity creates as a reserve".

"You can neither change History nor erase people's memory" Sotiris Zarianopoulos underlined.

"We honor those who, by all means, fought nazism and fascism, then and now. The Communist Parties which heroically led the national liberation and antifascist movements. The titanic struggle and the sacrifices of the Soviet Union, of the millions of Bolsheviks, of the Soviet people, who nailed the red flag in the heart of the nazist beast, in Reichstag".

Comrade Zarianopoulos ended his intervention by saying: "History doesn't go backwards. The 21st Century is the era of new, victirious socialist revolutions for the social liberation".

In Defense of Communism ©