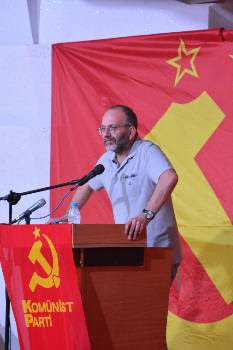 - What are the priorities of the Party this period?


First of all, we are trying to lead the struggle against the further islamization of the country. A large social dissatisfaction is manifested and our aim is to give her class orientation. The connection of the so-called political Islam with the attack against the working class becomes even clearer and today it is relatively easier for us to demonstrate it in labour places. The second major aim is to build Party organisations in the working places and the third one to intensify the preparation of our members in all levels during this chaotic period. We have weaknesses, but the Party is developing in a fast pace.

- How the peoples' movement can handle the existing division between religious and secular powers? How does the class-oriented powers intervene and what is their impact?

It is true that the working masses are divided in the stance towards political Islam. This is not the only axis of division, there are also ethnic divisions, but nevertheless, the tension between the secular forces and political Islam doesn't have to do with personal faith. It is mainly a struggle for the rights of working women against the effort to exlude them from social life. A struggle for the socio-economic rights of the working class against the effort to replace the social achievements with charity mechanisms. A struggle for public and free scientific education against the system of religious education. For a public and free Health system against the private and anti-scientific health system that the imams start to use beyond doctors. It is, also, a struggle against the legalization of the obscurantism of the 'Islamic State', 'Al-Nusra' and other criminal organisations which have thousands members in Turkey too (who are) ready to fight against the working class and the communists.

The Communist Party is against the idea of a common front against political Islam, (a front) which includes social-democrats, liberals or the kurdish movement. For us, it is a major issue to unify the struggle against religious fundamentalism with the struggle against the bourgeoisie which gains significant benefits from the so-called islamization.

Towards this direction we have created rallies, as far as the popular strata start to understand the connection of capitalism with political Islam. The potentiality and the necessity to create a class working movement exist. This is the only way to organise the workers who are affected by religious doctrines, but mainly they suffer from political authority and capitalist exploitation.

- We see the role of the imperialist powers and the Turkish government in the region. Do you believe that a generalized clash is possible? How can this also affect the Greek-Turkish relations, for example the situation in the Aegean?

Nobody can exclude a generalized clash. Of course, there are signs which show that the basic axis of this clash is the one of NATO with Russia, of the US with China. We don't know yet, but these are the two main sides. Both leaderships, of Russia and the US, lean towards this direction. In a way, we can say that the Turkish government lost the initiative in what we call 'Neo-Ottomanism'. In fact, it's (Turkey's) aspirations in Syria didn't proceed.

There are also contradictions between R.T.Erdogan and the US, as well as with the EU. These powers seem to want to replace Erdogan with someone more convenient and predictable, but he seems that he retains his powers, still having his "cards", the electoral power, the support of powerful parts of capital, the ability to manoeuvre and find alternatives (the case of Prime Minister Davutoglu and his removal from office is characteristic). In reality, Turkey has problem with the Kurds and the vast majority of the army is involed on this issue thus being focused on the Syrian borders.

Of course, the antagonisms of the Turkish with the Greek capital and the nationalistic ideologies always create a dangerous basis for a clash between the two countries. For example, we see the increased tension in the Aegean region and, certainly, our position is towards a class internationalist direction for the common struggle of the two countries' people.