Introductory speech by the GS of KKE D.Koutsoumbas at the Balkan Meeting of Communist and Workers Parties 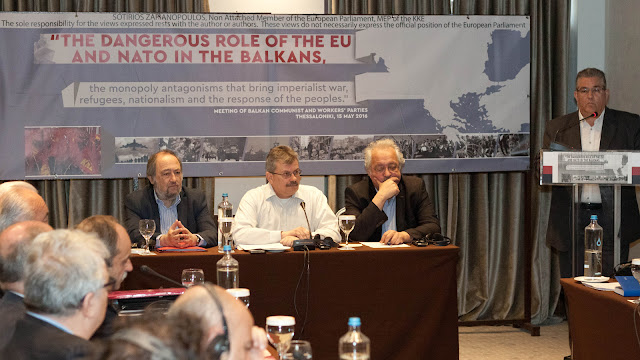 «The dangerous role of the EU and ΝΑΤΟ in the Balkans,  the monopoly antagonisms that bring imperialist war, refugees, nationalism and the response of the peoples» (Thessaloniki, 15 May 2016).

Speech by Dimitris Koutsoumbas, General Secretary of the CC of the KKE (Source: inter.kke.gr).

Dear comrades,
We thank you for your participation in today's meeting of the Balkan communist and workers parties, as well as for the contribution of all our parties to the maintaining of the Balkan meetings, which provide us with the opportunity at this level as well, at the level of the Balkans, to examine the current developments and to exchange thoughts and experiences from our activity.
Our experience confirms the constantly increasing necessity for the closer collaboration of the CPs, the collective examination of the developments, internationalist solidarity and joint activity and also the necessity to intensify the efforts to form a unified strategy of the communist and workers parties in Balkans and beyond.
We must develop these elements and of course each CP must intensify its efforts to establish solid foundations, to elaborate its political line and strengthen its bonds with the working class, to gain ground inside the labour-people's movement of its country.