Communist Youth of Greece (KNE): Statement on the decision of Athens Municipality to grant space for neo-Nazi gathering 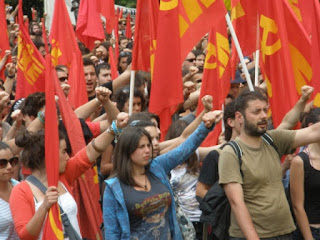 In a statement issued today, the Communist Youth of Greece (KNE) condemns the decision of the Municipality of Athens to grant a city park ("Gendarmerie Grove"/Alsos Horofilakis) for a gathering by the neo-Nazi 'Golden Dawn' party's youth wing:

"The decision of the Municipality of Athens to grant space at "Gendamerie Grove" to Golden Dawn for the organisation of the "Festival of Greek Youth" legalizes it's criminal activity. They give space to the Nazis in order to pour their racist and fascist poison.

If the Golden Dawn's Nazis want to organise a gathering, let them go to one of their leader's 10 properties; he is the richest political party leader.

The positions of Golden Dawn are positions which support the interests of the rich oligarchy and for that they are hostile towards the young people of the poor families. Golden Dawn, like a mastiff, serves the rotten and corrupt capitalist system which tortures the majority for the enrichment of the few. 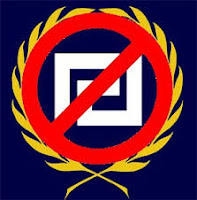 Their ideas, such as racism, intolerance, anticommunism, nazism are completely rotten. They aren't directed only against immigrants and refugees but against every young working person, every unemployed, every student, against every young man and woman who fights for a better life.

The youth of our country will finally isolate the nazi-criminals of Golden Dawn! They will not have a place to stand, not in any neighborhood, not in any school or university faculty. In the end, they will be sent to where they really belong: In the dustbin of History. We continue the struggle for the overthrow of the system which gives birth to fascism and nazi criminality".