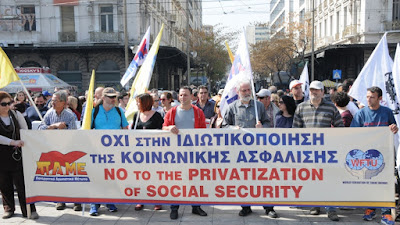 With mass, militant demonstrations in Athens, Thessaloniki and all the major cities, public sector's workers sent their message to the co-coalition government. Thursday's 24-hour walkout called by public sector union ADEDY coincides with a review by lenders of Greece's compliance with terms of an international bailout agreed last year.

Organised by the All-Militant Workers Front (PAME), the demonstration in central Athens took place in Omonia Square where thousands of workers expressed their condemnation for the government's draft law on social security- an anti-people law that destroys the social security system and any rights derive from it.


According to class unions, the 24-hour strike is a "warm up" for a massive 48-hour general strike that will take place when the government submits the law in the parliament. 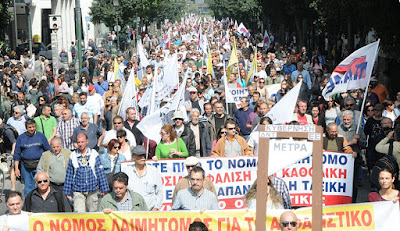 After today's strike, PAME continues with the big rally on Sunday, April 10, to welcome the Great March Against Unemployment that started last week from Patras.