Seems that the- supposedly serious- 'The Economist' magazine is not that well-informed about Lenin. The bourgeois magazine, famous for its neoliberal views and its support of the Afghanistan and Iraq imperialist massacres, decided to express its blatant anticommunism with a tweet about Vladimir Lenin. On the occasion of Lenin's 146th birth anniversary, the british magazine published the following tweet: 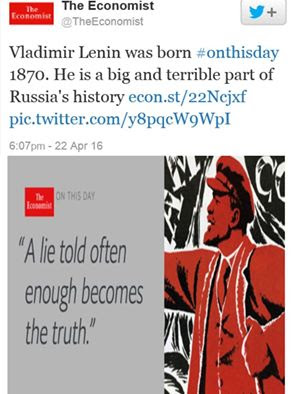 However, the editors of the magazine- or whoever is in charge of their twitter account- forgot to check their sources. Because the quote saying "A lie told often enough becomes the truth" is something Lenin never said. There is not a single original and truthful source to suggest that the above words were written or said by Vladimir Lenin. The "lie quote" has been attributed to a prominent Nazi, Hitler's Propaganda Minister Dr.Goebbels (Publications Relating to Various Aspects of Communism (1946), United States Congress, House Committee on Un-American Activities, Issues 1-15, p.19). In his infamous book "Mein Kampf" (Vol.1, Ch.X), Adolf Hitler wrote the following:

"All this was inspired by the principle—which is quite true within itself—that in the big lie there is always a certain force of credibility; because the broad masses of a nation are always more easily corrupted in the deeper strata of their emotional nature than consciously or voluntarily; and thus in the primitive simplicity of their minds they more readily fall victims to the big lie than the small lie, since they themselves often tell small lies in little matters but would be ashamed to resort to large-scale falsehoods. It would never come into their heads to fabricate colossal untruths, and they would not believe that others could have the impudence to distort the truth so infamously. Even though the facts which prove this to be so may be brought clearly to their minds, they will still doubt and waver and will continue to think that there may be some other explanation. For the grossly impudent lie always leaves traces behind it, even after it has been nailed down, a fact which is known to all expert liars in this world and to all who conspire together in the art of lying".

But, apart from the fraud of attributing to Lenin words he never said, we should point out the following. 'The Economist', a news magazine which:

- endorsed the executioner of the British working class, Margaret Thatcher, in 1979 and 1983,
- supported ISAF/NATO military operations in Afghanistan,
- fanatically supported the 2003 imperialist massacre in Iraq,
- has been totally devoted in promoting capitalist propaganda,

seems ridiculously funny to call Lenin "a big and terrible part of Russia's history". While the failure of Capitalism can be seen in every corner of the world, Lenin's ideals continue to inspire millions of working class people. While the neoliberal theories- promoted by magazines like 'The Economist'- have condemned whole nations in poverty and misery, Lenin's socialist ideas continue being the only alternative to capitalist barbarity.